Trump Has Exploited the White Supremacy of the GOP 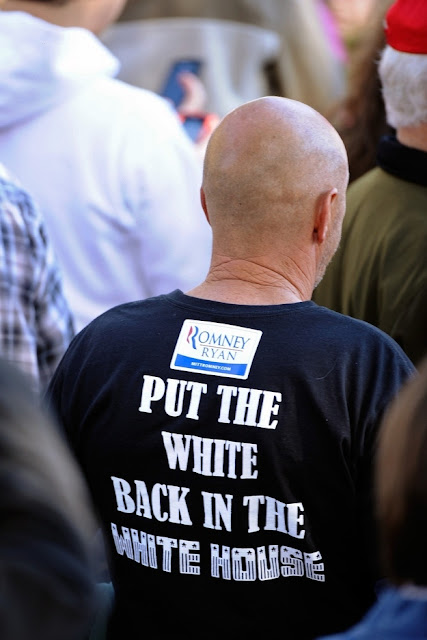 It would be far too easy to dismiss this photo as an anachronism and as something that wasn't already in the water in terms of our politics. This was from 2012, and it was a real sentiment at the time.  There were anti-President Obama demonstrations on a regular basis and they were vicious and racist in nature. Thanks to the Tea Party, it was mainstreamed into our living rooms.

The difference then from right now was, neither Mitt Romney nor Paul Ryan would have been caught dead endorsing this message because it would have resulted in condemnation from the larger GOP establishment. That is what Trump smashed through in 2016 and eradicated in the first year of his presidency. In fact, his destruction of these things is entirely why the GOP deserves to lose every election this year.

No Republican fears condemnation from Mitt Romney. They shit themselves at the thought of a swarming horde being unleashed by a Trump tweet. The takeover has been complete for a while.

Without an establishment to protect the party, you get Trumpism and the poison that comes with it. The white supremacy is a feature not a bug with these people. They want it, and they want to create an environment where it exists without having to pay the price for it.

In some rare cases, you will have an unemployed pundit, a former elected official, or a Mitt Romney who will say "Black Lives Matter" but that's only because they were not compelled by shame to say it sooner. In other cases, a figure like Paul Ryan will entirely remove themselves from the political arena in order to escape accountability. And then you have the full-on, white-power people who Trump thinks will be there to get him re-elected. They won't say it because they are the dead-enders who will stand as long as they can until forced to retire.

If this country can bring back the idea of shame, that might make a difference. Without it, the lowest people will continue to parade around like their ideas mean something.

The same force that is driving the name change of Washington D.C.'s ridiculously non-competitive NFL franchise is pushing directly against the history of this country. It used to be fine to have policy positions that delivered whites the supremacy they felt was always theirs. A Romney-Ryan ticket would have been great for suburban whites and a shit sandwich for everyone else. Tax cuts, reductions in SNAP benefits, letting kids at school go hungry remain mainstream Republican principles dressed in neater themes. Your garden variety Liz Cheney lives for the day when they can openly crap on poor people, rake in the donations, and live in a world free of Trump's reign of error.

They are just counting the days until they are in the minority again. They know the public will blame Democrats for everything that isn't perfect. President Obama dealt with that until the day he left office. And the media is trained to be skeptical of equality and tolerant of conservatives who are willing to complain about being treated unfairly. All the shit that doesn't work, that's because a Democrat wanted it that way and not because a Republican president broke every goddamned thing and left the treasury empty and the military disemboweled.

Change is now hitting this country so hard in the face that it is necessary to pause and think about what's happening. The danger is not that the GOP is going to win close races anymore. The elections of 2020, 2022, and 2024 are going to come in rapid fire succession and each one will be more and more of a tsunami that swamps the old establishment of white supremacy in this country. If you don't get everything you want this November, just wait. The anger that will be unleashed will continue to push forward and will gain in strength. We might end up with 12 states that will cling to the idea that the Republican Party is the only way to go. Those states will see precipitous calamities and declining standards of living while they take in more tax dollars than they pay out, and Democrats will still struggle to explain why that is happening.

The only thing that can stop these forces is justice itself. If we don't make that our goal, nothing else is going to be fixed. You can't correct the course of this country without ensuring that everyone is treated fairly before the law. When people can walk down the street and not be afraid of being killed by a police officer, then and only then will you see a return to the focus on external issues and philosophical ideas. We gotta have equal treatment under the law right the fuck now, and we gotta smash the living shit out of Trump's white power ideology.

Nothing else matters until it has all be swept away and discredited. If we don't wipe out these ideas now, they'll continue to seep into the cracks of our failing democracy and break up the country.
at July 04, 2020 No comments:

There is no easy way to quote the great philosopher of the 21st Century, Queen Elsa of Disney's Frozen, but here goes.

Spending untold millions, and risking the lives of searchers in that inhospitable part of the world, is simply not worth it. To lose one more plane or one more ship and everyone on it would simply compound the tragedy, and that's a very real possibility given how terrible it is to try and operate in the South Indian Ocean.

We have thousands of years of experience with this sort of thing as humans--ships, planes, people, boats, rafts, canoes, caravans--these things vanish. They disappear. They are found again, sometimes, but they do vanish. This is the way of the world.

Accepting that would be healthier than enduring the continued incompetence of the Malaysian authorities and the efforts by the worlds surveillance powers to mask their abilities and let people know what they heard and collected in the wake of the doomed flight.