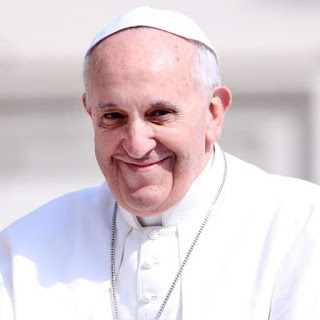 Pope Francis is out to change minds and change hearts:

In a documentary that premiered Wednesday in Rome, Pope Francis called for the passage of civil union laws for same-sex couples, departing from the position of the Vatican’s doctrinal office and the pope’s predecessors on the issue.

The remarks came amid a portion of the documentary that reflected on pastoral care for those who identify as LGBT.

“Homosexuals have a right to be a part of the family. They’re children of God and have a right to a family. Nobody should be thrown out, or be made miserable because of it,” Pope Francis said in the film, of his approach to pastoral care.

After those remarks, and in comments likely to spark controversy among Catholics, Pope Francis weighed in directly on the issue of civil unions for same-sex couples.

“What we have to create is a civil union law. That way they are legally covered,” the pope said. “I stood up for that.”

This is a stunning development, and it is important to see how this affects Catholics world wide. It should not be seen solely as a rebuke of what is going on with the United States Supreme Court nomination of Amy Coney Barrett nor should it be seen as another attack on Trump. But it helps!

People downplaying the pope’s words, on camera, endorsing civil unions for gay couples should ask LGBT Catholics how the remarks make them feel. Having just spent months researching the Vatican’s statements on LGBT issues in the 1980s for my book, I assure you this is big news.

Mary Thom of New Ulm, Minnesota is a Complete and Utter Bigot 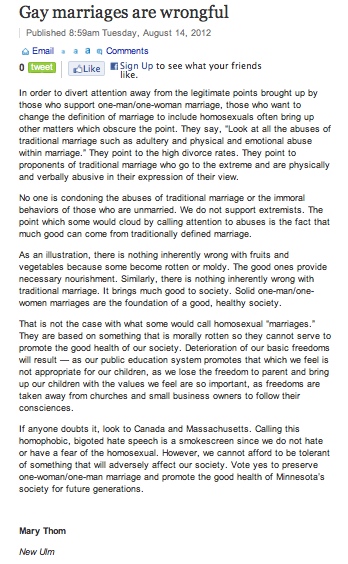 The content of this letter is nothing new. The writer has an axe to grind, and so the letter is sent to newspapers where, given their own politics and inability to filter out bigoted hate speech properly, the woman is given a forum for her hateful views.

I suppose there is a benefit to this. Without the publication of these letters, how would you know who the crazy people are?

But the very idea that someone would get to say "homosexual marriages" are "based on something that is morally rotten so they cannot serve to promote the good health of our society" is to promote the ideas of a world class bigot. That is what is morally reprehensible here; not the fact that gay people want to be married but that some crazy lady in New Ulm, Minnesota would get a place to spread her eliminationist rhetoric.

Mary Thom claims to not be "extreme" but that's what she is--an extremist who wants to destroy homosexuals because they are morally rotten.

When someone says "we cannot afford to be tolerant" it means that being intolerant is perfectly fine. From that, we see violence, shootings, hate speech and murder. We see people assaulted, killed, attacked, shot, knifed and stoned to death.

Someone let Mary Thom emerge from the swamps of cruelty and viciousness. Her letter should have remained there.
at August 14, 2012 No comments:

Americans Will Not Accept a Catholic Theocracy

I think what John Cole is saying here touches on something that has escaped a lot of the strategists and pundits so far.

Catholicism really isn't very popular in the United States of America, and it has never been popular. Our popular media has avoided this subject in order to appear unbiased. But, the fact of the matter is, the teachings of the Catholic Church have largely been rejected by most of the American people, and by most American Catholics.

Now, is that solely because of religious bias? I'm willing to grant someone the point that there is, and probably always will be, a bias against Catholics. But there is a bias against virtually every powerful religion in the world. And when it comes to the American bias against Catholicism, it stems mostly from the fact that the church is run by a hierarchy in Rome that has nation/state ambitions that are rarely acknowledged.

This battle may be fought in the punditocracy right now, but it will emerge as a battlefield in Latin America before all is said and done. It has been a battlefield going back over forty years. Contraception and the Catholic Church are issues that are going to reach critical mass in places like Brazil and Mexico if this insistence on absolute opposition continues to be the focus of Rome. Throughout the region, there are examples of how a polite coexistence have been achieved, most notably in Guatemala. Could it lead to a violent schism? Could we end up with one Catholic Church for the world and one that is specifically for Latin America, where half the world's Catholics are moving towards the same position that American Catholics have had for decades?

It's fairly clear to me that the actions of America's Catholic hierarchy is now bordering on being anti-American. Will it come to registering bishops as agents of a foreign power?

Well, if the stupidity, the overreach, and the absolutism are any indication, why not? Americans don't want theocracy. If they're not going to accept the born again version, why would they accept the Catholic version?
at February 11, 2012 1 comment: