A Short Sale and an Object Lesson 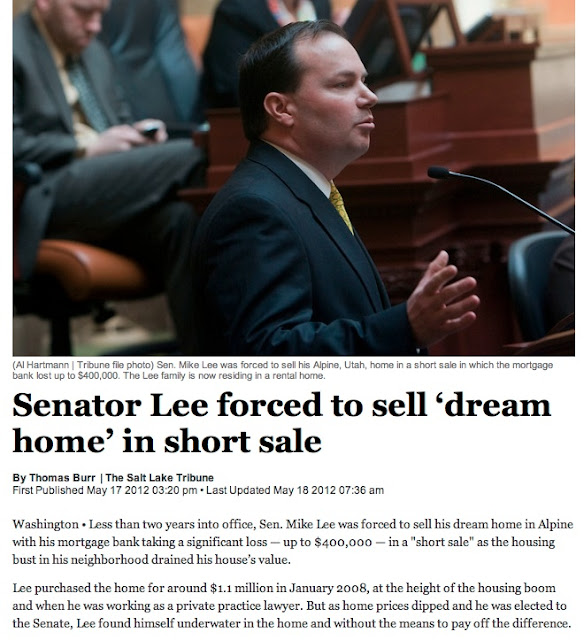 This is an interesting story because it demonstrates just how out of touch the Congress is with what is going on in America.

If you're Senator Mike Lee, dumping your home in Alpine, Utah isn't about being caught up in a bad housing market. It's about getting rid of a property that is dragging you under before the lucrative paydays of being a United States Senator can start arriving.

Read this part of the article and try to keep from guffawing:

The state’s newest senator ended up in a "short sale" — in which a mortgage holder and bank agree to take a monetary hit to sell the home — after Lee was elected to the Senate and left his law firm, Howrey L.L.P.

Lee said he knew he had to sell his home if elected because he went from a salary of several hundred thousand dollars a year to the Senate payroll of $174,500. But he thought improvements to the home and a rebound in housing prices would help. Failing that, he was owed a large sum, he says, from Howrey that could provide a "cushion."

But then a neighbor’s home went through a short sale, dropping home values on the street, and Howrey filed for bankruptcy, leaving Lee with little option other than to persuade the bank to take a loss.

Correct me if I'm wrong, but going from an income of "several hundred thousand dollars" to $174,000 doesn't exactly mirror the American experience right now, does it? Those are choices people are certainly faced with in a few rare instances, but how many of them are looking at the potential earnings of having their fingers on the levers of power?
Lee obviously had a choice as to whether or not to maintain ownership of his dream home; he chose to dump it because it was losing value. How he believed that "improvements" to the home would help him pay his bills is beyond ludicrous to believe. How does improving a property lower the mortgage? That sounds like a sad-sack lie in order to make people ignore the fact that he calculated that a Senate seat would propel him out of Utah and far beyond what he could have achieved as a lawyer.
Lee ran for the Senate and bailed on his law firm because being a United States Senator is one of the most lucrative scams going. He, literally, grew up amongst Senators and was raised in McLean, Virginia amongst the politically connected (his father served in the Ford and Reagan Administrations). It's that simple. He knew several years ago that he would end up taking a hit--but he probably also knew that his law firm was on the ropes and he needed to find something else to do in order to maintain his cash flow. I don't know--but it sounds suspect to me. So, why not return to Washington D.C. and cash in on being in Congress? Sounds like a smart move to me. Dumping his "dream" house was smart as well. Who needs a money pit back home when your real home is in the leafy suburbs of Washington D.C.
Communities all over America are vulnerable to the housing market and it's not just about short sales. Abandoned homes litter the American landscape. Empty, blighted properties are driving down property values everywhere. The people who live there are seeing their incomes remain stagnated and their lives are on hold because they cannot unload the properties (and get a sweet deal like Lee did and have the bank and the mortgage holder take a voluntary loss) and move on.
Well, Senator Lee has moved on. The object lesson here is, sucks to be you if you don't have a Senate seat to fall back on when things go south. He has four more years to start making deals and to start raising millions in campaign contributions. His connections guarantee him this payday. If his Senate career survives past his next re-election campaign, he can look at being a millionaire with as many homes as he wants when his twelfth year in the Senate is up. I'm sure he's crying like a baby over all of this.
Do you think Senator Lee is going to start writing legislation that will make things easier for people in his situation? No, he's from the party that thinks that your problem with your mortgage is because you're a lazy sinner who is getting what you deserve, so pull yourself up by your own bootstraps and win your own Senate seat, sucker.
at May 19, 2012 No comments: 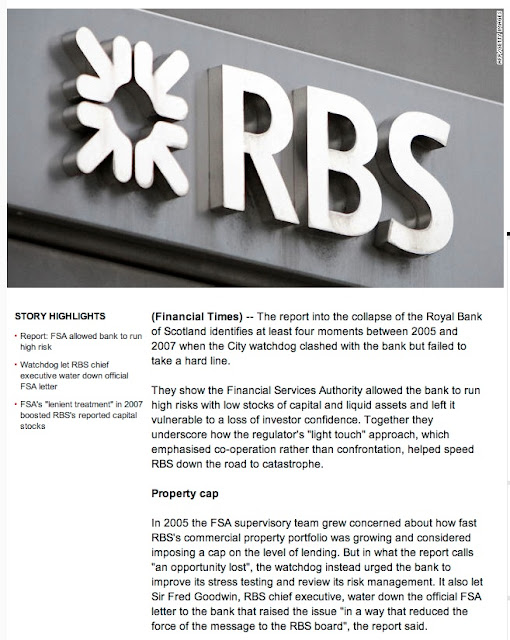 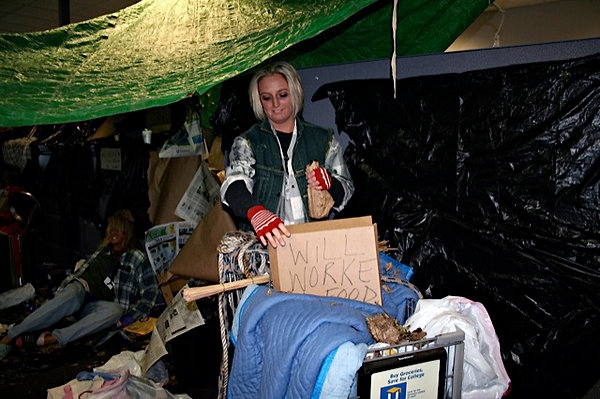 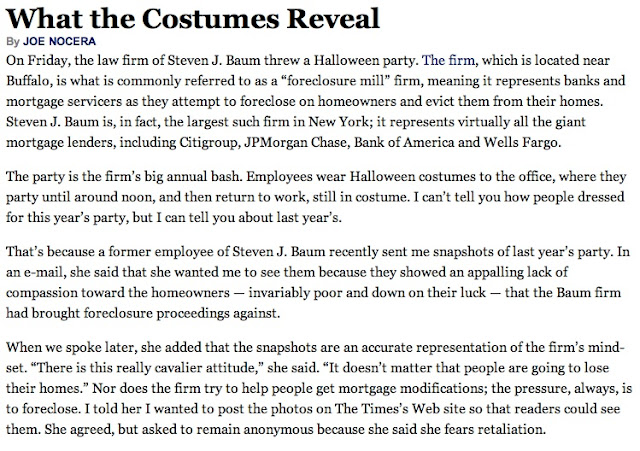 Again, karma is a real bitch. Economic disaster can hit any time and anywhere. And now the world knows what the Baum firm thinks of itself and the people it has spent the last few years tearing apart. Well, 'may you live in interesting times' was never more apt.
at October 29, 2011 No comments:

Foreclosure Blight and the Responsibility of Banks 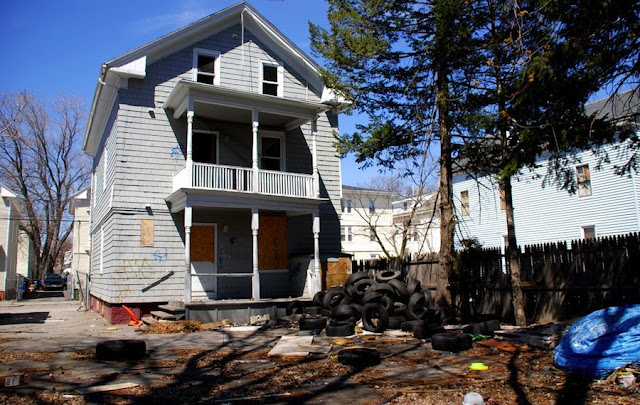 Banks have become homeowners, and so it stands to reason that banks should be treated like homeowners when it comes to blight:

[...] the foreclosure crisis is riddling communities with blight because no one wants to shoulder the responsibility of maintaining foreclosed homes.

"There's one on every block," said Elenes, a community organizer with the Alliance of Californians for Community Empowerment in Watts, a low-income South Los Angeles neighborhood pockmarked with foreclosed homes. "All we want is for the banks to step up and be good citizens."

Communities across the nation have made little progress in getting banks to maintain foreclosed properties, and as the ongoing crisis matures and bank-owned homes fall into advanced stages of disrepair, cities and residents are getting desperate. In a keenly watched move this month, Los Angeles forged a new strategy — it sued one of the world's major financial institutions, Deutsche Bank, to force it to take care of 166 properties, both vacant and renter-occupied, charging the blue-chip German giant has turned into the city's largest slumlord.

"The buck stops with the owner of record. We're saying, 'You are an owner like any other owner,'" said Julia Figueira-McDonough, deputy city attorney.

It's only fair. If you want to take away an asset, then that asset becomes your problem, not the problem of the people who live around your blighted property. A severely blighted property can drive down the value of the homes around it--and this creates a liability issue for banks. An entrepreneur could start a company specializing in preventing, maintaining, and rehabilitating blighted properties and the banks should be forced to use that sort of service in order to prevent creating "holes" in neighborhoods all over the country. 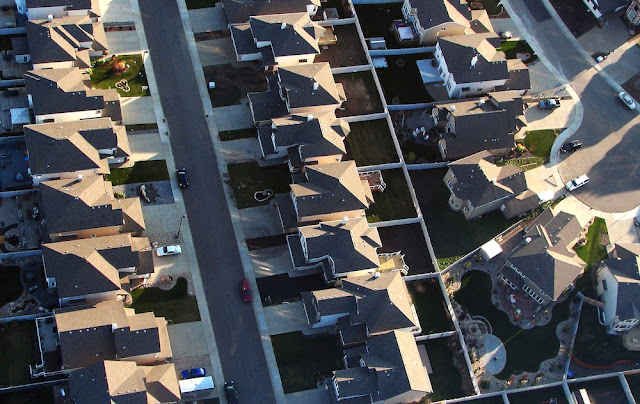 Americans are refinancing their homes these days, and I don't know if this is because they want to save themselves from foreclosure or help build up another bubble in the housing market:

Applications for U.S. home mortgages rose last week, helped by refinancing demand as interest rates fell for the third week in a row, an industry group said on Wednesday.

It makes sense on the surface--lower interest rates are triggering refinancing--but what does it mean in the long term? Is it really saving people money or are they getting involved in the creation of another housing bubble? Are strapped consumers taking "equity" out of a home that they are under water in (where possible) or are people taking what little equity they still have out of their home in order to compensate for lower wages and under-employment?
I don't think we ever really got a handle on the mortgage industry. I don't think it has been reformed, re-regulated and restructured in such a way as to benefit American homeowners and it could, I suppose, be so badly structure right now that any surge in refinancing might trigger the creation of another mini-bubble.
There are a vast number of homes on the market--adding in foreclosed homes puts the number at the high end of nine million previously owned homes being available for purchase. And, given all of that inventory, which has caused a drastic decrease in property values, why would you go and "reset" everything, given that no one really knows where the market is headed? Can you continually refinance yourself into oblivion if the value of your home doesn't stabilize?
If I was a homeowner right now (got out a year ago and it wasn't pleasant), I'd think long and hard about any kind of refinancing arrangement. You might save yourself a little money. But you might end up dealing with an unscrupulous new lender that might engage in unethical or nefarious practices. There is a real problem in this country with banks taking away homes that that they cannot prove they own because the deeds and the financing paperwork are not squared away. Why would you wade into this mess and create another opportunity for a lender to take a mortgage (yours) and bundle it with others and then refinance or resell those loans?
Sounds like a recipe for disaster to me. And, for what? Saving a hundred bucks a month or not much more? Is that worth losing a home over?