The Federal Government Must Protect Consumers From Griddy 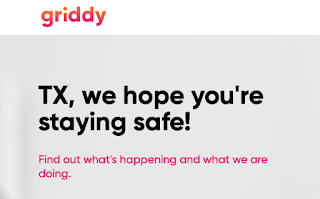 As the Texas power grid collapsed under a historic winter storm, Jose Del Rio of Haltom City, in the Dallas-Fort Worth area, saw the electricity bill on a vacant two-bedroom home he is trying to sell slowly creep up over the past two weeks. Typically, the bill is around $125 to $150 a month, he said. But his account has already been charged about $630 this month — and he still owes another $2,600.

“If worse comes to worst, I have the ability to put it on a credit card or figure something out," Del Rio said. ”There is no one living in that house. All the lights are off. But I have the air at 60 because I don’t want the pipes to freeze.”

When he contacted Griddy, his electric company, they advised him to switch providers, Del Rio said.

“The last thing an awful lot of people need right now is a higher electric bill — and that’s unfortunately something a lot of people will get stuck with,” Schulz said.

Royce Pierce and his wife, Danielle, who live in Willow Park, west of Dallas, have been watching their electricity bill tick up by nearly $10,000 in the last few days for their three-bedroom home. While the family told NBC News they consider themselves lucky because they’ve had power, the financial burden has come with additional challenges.

Since the family is on a variable rate plan with Griddy, the company automatically debits the bill as they use electricity. Danielle said she closed the debit card connected to their electricity bill because Griddy wiped it out. The family has been using separate accounts and credit cards to pay for necessities as the storm goes on.

Griddy claims that they are fighting against the rate increases. Good! Fight like hell! But when you discover that Texas politicians have set up a lobbyist-friendly situation that allows a public utility to fleece consumers, that's when it is time to say enough is enough, goddammit.

I don't care what the "variable rate plan" is because I don't think anyone should have to pay these outlandish prices. Your power bill--and, for that matter, your health care bill--should not be allowed to wipe out your credit cards and your bank account. Add "variable rate utility bill" to the list of things that needs to be fixed now that there is a Democrat in the White House.

This is exorbitant and cruel in nature. The Federal government needs to step in and protect the people of Texas from predatory utility companies that have no right whatsoever to drain the life savings of anyone. And no, I don't care if it's a legal agreement between the utility and the customer or if it's something people signed away their rights for. I think the government HAS to step in when a situation gets to this level of price gouging. It is immoral and unjust.

I can still remember Election Day, 2008.

In our little corner of Maryland, I went to the polling place and voted. Some jackass was driving around in the parking lot, obstructing people from voting, and he was campaigning from his car window in violation of the law. On his bumper were two stickers:

One of the traditional measures of how a President was doing was centered around the price of a gallon of gas. Nothing affects working people more than what they pay at the pump. You can't just "cut down" on the amount of gas you buy because people use it to get to where they have to be. As in, work, school, and to the store. Nobody buys gas they don't need. And so the impact on our economy is felt when the cost of gas is high because you HAVE to buy gas--you cut back on extras after you buy the gas you have to have. That's what drives down our consumer consumption.

This President can't even campaign for other Democrats because things are so toxic, and there is no shortage of those who believe he has been a tyrant/apologist/sellout/failure. None of those people remember the days when President Bush was clueless about why our endless wars in the Middle East were causing massive disruptions in the oil supply. The same people who apologized for Bush are deranged about Obama, and vice versa.

The best case for voting for Democrats? Cheap gas, baby. Enjoy it while you can.
at October 15, 2014 No comments:

They are not giving up their oil:

A worker at an oil sands plant in Canada was attacked and killed by a bear Wednesday.
The attack took place at a Suncor Energy base plant, 200 miles north of Edmonton.

"We are shocked by this very unusual incident and there are no words to express the tragedy of this situation," said Mark Little, a Suncor executive vice president.

Between 1900 and 2009, 63 people were killed in 59 incidents in Canada and the United States, according to a 2011 Journal of Wildlife Management report. The study concludes that as human populations and developments rise, so have bear attacks.

The bear in the Wednesday attack was put down.

While it is rare for people to die from a bear attack, it shouldn't be a surprise to anyone that the environmental impact of absolutely destroying the land in order to extract fossil fuels is going to be thwarted at times by the inconvenient reality that there are bears trying to live where the oil is.

The bears are no different than the people who had to be displaced and the real tragedy is that there will be no introspection and no debate over whether it's a good idea to build the Keystone Pipeline or continue to wreck everything. The only thing that matters is cheap gas and looking the other way.
at May 08, 2014 No comments: