For 18 years, thousands of students at the prestigious University of North Carolina took fake "paper classes," and advisers funneled athletes into the program to keep them eligible, according to a scathing independent report released Wednesday.

"These counselors saw the paper classes and the artificially high grades they yielded as key to helping some student-athletes remain eligible," Kenneth Wainstein wrote in his report. He conducted an eight-month investigation into the scandal, which has plagued the university for nearly five years.

Four employees have been fired and five more disciplined because of their roles. One other former employee had honorary status removed, Chancellor Carol Folt said Wednesday.

Wainstein is the former federal prosecutor hired by UNC to independently investigate the academic fraud brought to light by CNN, the Raleigh News & Observer and other media outlets.

In all, the report estimates, at least 3,100 students took the paper classes, but adds the number "very likely falls far short of the true number."

Given that this was a pervasive, institutional fraud of a magnitude that is difficult to believe, the death penalty is well warranted for Division I athletics at North Carolina. At a minimum, all victories and championships should be invalidated.

That would mean Roy Williams, for example, would have to look elsewhere for a legitimate national championship title.

If they find the same thing at Duke, I would invalidate everything accomplished in the whole ACC forever. I mean, damn. How do you get away with cheating like this? I expect this sort of thing out of Kentucky. I didn't expect to find out that a degree from the University of North Carolina isn't worth the paper it's printed on.
at October 23, 2014 No comments:

The Wrong Kind of Need, Fulfilled 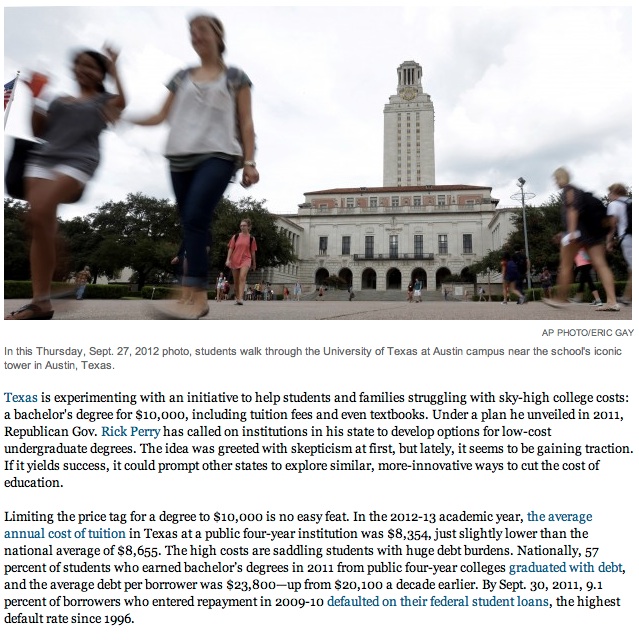 This story feeds into the idea that everyone has to have a college degree in order to be a part of the emerging economy. The fact of the matter is, not everyone needs a degree, but a lot of people need more skills than they already have.

College degrees don't come with skills; they come with the ability
to get skills in some cases or, in many other cases, they come with a validation stamp that says "this person can be educated further."

The problem is, we are short of manufacturing job skills and I'm not sure which degree program listed above is really going to fix that problem. The people who get college degrees nowadays are usually women, and they are usually not interested in manufacturing positions. There are exceptions, but, by and large, they're graduating with degrees in business or psychology and are not looking for factory jobs.

We initiated a mindset several generations ago that linked factory work with failure and doom, and now we're paying the price for that.

Texas should focus on training people for jobs that actually exist in Texas instead of trying to ram more college graduates into an economy that needs something else.
at November 24, 2012 No comments:

Another Kind of Brain Drain 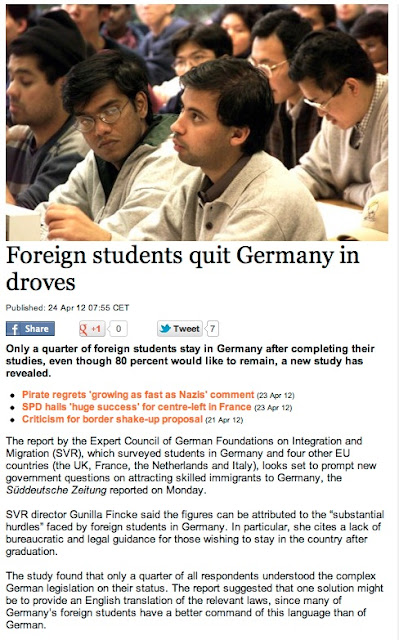 There is a parallel here in the American experience with foreign students. After 9/11, American policy towards students from abroad and student visas became harsher and more restrictive. This resulted in a redirection of students to places like Canada and Germany. Now, we're seeing the flip side of this.

Students that would have maybe studied in America are finding themselves leaving Germany as soon as their education is completed, due in large part to the complexity and difficulty of complying with restrictive, anti-immigrant laws that discourage keeping intellectual capital in the country. Germany needs foreign workers, desperately, in order to maintain its status as a net exporter of goods. It is not uncommon for one German worker to support as many as five other individuals (extended family, etc.) and it is entirely possible to do that here.

If you are going to bring people to your country and educate them and provide them skills, keeping them should be easy. Instead, these people, who have great value and potential, move on, looking for something palatable. Who can blame them?
at April 24, 2012 No comments:

Towards a More Permanent Underclass

There are a lot of things to despise about this.

First of all, it hits poor people harder than anything else. And the poor are not the problem--the predatory financial class is the problem. Few, if any, are not creating jobs, they are destroying the American economy by gaming the system, and they know that they can buy their way out of political or legal trouble.

Second, it inflates the cost of education even more in this country to the point where it forces people to chase diplomas and certificates and pay the ever-increasing costs associated with them. If you have left high school, who do you have to pay in order to get GED training? That's right--a for-profit company that will cash in on the desperation created by this bill. And if you want to climb above the level where people are scrambling and competing and improve your situation, it makes it more expensive to get above the GED level because, after all, no one is just going to give you a degree. Especially if it is a for-profit outfit that, hooray, can now go on screwing people even more, thanks to this Congress.

If the Democrats want to win this fall, they have to isolate and highlight issues like this--issues where the Republican Party, once again, screws the working poor and create a permanent underclass of people who are trapped and desperate and are made even more so by the prospect of losing their unemployment benefits simply because they don't have a GED.
at January 10, 2012 No comments: