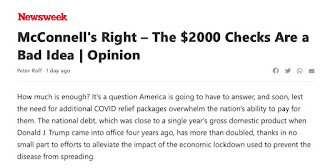 The quickest way to destroy the reputation of the publication that you bought is to turn it into a wingnut grievance machine and watch the money come pouring in, right?

Fucking Newsweek, what a joke. 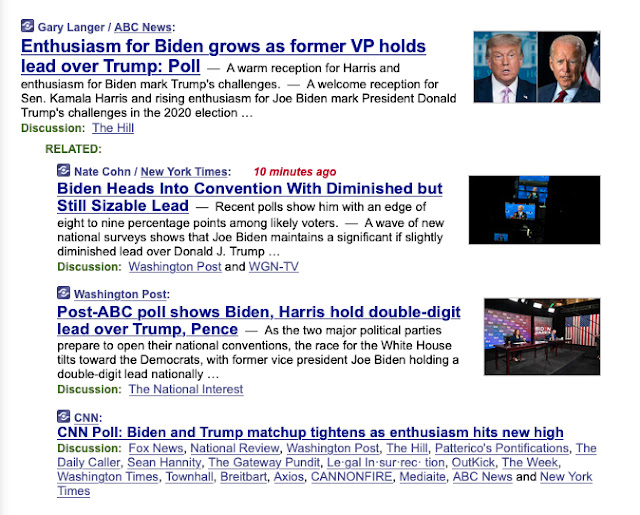 The media loves a horserace, and 2020 is no different. My opinions are not meant to convince you or reassure you, but here's what I believe will happen on Election Day.

Trump will try to steal the election. He will be assisted in this endeavor by the Russians, the Saudis, and probably some combination of the UAE, China, and Turkey. Their efforts will largely fail because the turnout will overwhelm previous elections and hew very closely to the 2018 Blue Tsunami that swept the GOP out of power in the House and out of power in numerous states. The rejection of Trumpism will mean electoral defeat.

I think Biden will win the popular vote by at least six points, perhaps seven million votes in total. That may be conservative, but he is not the same figure as Hillary with the same baggage. The panic you see right now ignores the fact that it is still summer and the numbers won't start to harden for at least a month, if not longer. Trump has done nothing to appeal to the center and he has done nothing but celebrate an unstable, unreasonable base that will vote only for white supremacy. There is no other appeal with Trump, nothing else that redeems him and no other way that he appeals to Americans. He represents white power and nothing more.

Remember this phrase. "The cake is baked."

That means that the race is largely already decided. Trump is not going to win any more voters over to his side. The opposition to his presidency hardened within weeks of him taking office. Americans have to turn out and vote if they want change. I believe that there are enough to end his presidency and these are the voters who voted in 2018 to put a stop to the criminal insanity of GOP governance. Structurally, the Republicans control enough of the country to hold back a massive landslide that would otherwise leave them with 30 Senate seats and 100 House seats.

If we're really, really lucky, that's what Election Day 2022 will look like in terms of repudiating the last four years. But that's the optimist speaking here. The realist says we're in for a tough road ahead.

What concerns me is that the American people are never going to be "reasonable" in the years ahead. What should be a four hundred electoral vote for the Democratic candidate blowout will probably be about 325 for Biden. It will be convincing enough to force Trump and his army of lawyers to fight a rearguard action against being hurled out of office that will fail. They will scare people, they will muddy the transition, and then the pardons will come in a flurry. Biden and Harris will take over a broken government that is littered with destruction, empty chairs, and overflowing paper shredders.

The media will be depressed by this outcome. They want four more years of chaos and upheaval. The far right wants to crush their enemies, who happen to be other Americans. The far left wants a 1917 styled revolution that destroys the moderate wing of the Democratic Party as well as all other pretenders. Nobody will be happy.

The thing I have to remember is that a centrist campaign for the presidency is going to drive me crazy. Biden will appeal to every single voter that he can get and try to win Ohio, Texas and Georgia. This is probably not the wrong strategy, but it won't inspire the people who handed him the nomination.

If the GOP holds the Senate, we're in for at least two years of paralysis and gridlock, which the media will love.

Astrology and the Reagan Presidency

The historical record has been far to kind to the Reagan presidency. Ronald Reagan has been sainted by the Republican Party which, in its present incarnation, would never admit him as a candidate for anything anywhere. The thing that always stuck with me about Reagan's time in office, which I remember because I lived through it, was the astrology part.

Astrology, for those of you who don't know, is pure, unadulterated bullshit masking itself as made-up nonsense. It has always been bullshit. Astrology will always be bullshit. And, right there on television tonight, ABC News was running a story about astrologers who were bilking people out of hundreds of thousands of dollars. But, wait, there's more. ABC News allows an astrologer to peddle her wares on their "health" page.

It's 2014, for God's sake. I mean, honestly. The ridiculousness abounds. So much for "entertainment."

The Reagan Presidency relied on astrology and it has gotten a pass for this fact. I think this sums it all up:

“Virtually every major move and decision the Reagans made during my time as White House chief of staff was cleared in advance with a woman in San Francisco who drew up horoscopes to make certain that the planets were in a favorable alignment for the enterprise,” he wrote in the memoir, “For the Record: From Wall Street to Washington.”

Just so we're clear on how delusional all of this thinking really was:

In an interview with “CBS Evening News” in 1989, after Reagan left office, Miss Quigley said that after reading the horoscope of the Soviet leader Mikhail S. Gorbachev, she concluded that he was intelligent and open to new ideas and persuaded Mrs. Reagan to press her husband to abandon his view of the Soviet Union as an “evil empire.” Arms control treaties followed.

Let us bear in mind that the Central Intelligence Agency's collective analysis of the Soviet Union was about a hair better than that of Miss Quigley's, which was based on the bullshit practice of astrology. Whenever you hear someone venerate the Reagan record, think of the astrology.

J. D. Gordon is a Jackass of the Highest Order

What is this bullshit?

Here’s another secret the White House doesn’t want you to know about the VA. Al Qaeda detainees get better medical treatment than our veterans.

Yes, it’s true. I know because I served as a Pentagon spokesman from 2005-2009 and visited Guantanamo Bay Naval Base over 30 times during those years.

Despite the fact that Al Qaeda terrorists carried out the Sept. 11 terror attacks, killing 3,000 people in America, the admitted co-conspirators and their roughly 150 fellow jihadists at Gitmo have approximately 100 doctors, nurses and health care personnel assigned to them.

Doctors and medical personnel are at their beck and call. Got a cold, a fever, a toothache, a tumor, chest or back pain, mental health issues, PTSD? No problem, come right on in. Military doctors are waiting to see you.

I mean, Jeebus. The brass balls on these people must click-click-click well into the night while they're spitballing and trying to come up with this stuff.

Guess who has tried, repeatedly, to close Guantanamo Bay? The Obama Administration. Guess whose Congress has blocked every attempt to shut it down? Oh, that would be the Republican one, which has had the gall to stick it to Veterans for years. Guess who has been trying to treat millions of Veterans while the Republican-controlled Congress shuts down the government and refuses to pass adequate funding bills? The Obama Administration, of course.

You don't get to break the American military and ruin several countries and then come back a half a decade later and hope people forgot everything you damaged, broke, and mismanaged because of your incompetence and stupidity. The mere fact that Gordon writes for Fox News speaks volumes to the impossibility of giving anyone who worked for the Bush Administration a decent job in the real world.

I'll say this for our Kenyan-born black Mooslim Prezuhdent--at least he figured out that killing them with drones in their beds was better than sending them to Gitmo in a diaper.

This is the perfect example of jackassery--any Bush Administration official who criticizes how we are caring for Veterans should shut the hell up and pray that the amnesia of the American people continues well into the future.
at May 23, 2014 No comments:

How Do You Sue Porsche?

How did this end up being a lawsuit?

The court documents filed by Kristine Rodas describe the 2005 Porsche Carrera GT that her husband was driving as a an "ultra-high-performance-super-sports car for the road," that goes from zero to 60 mph in 3.5 seconds and has a top speed of 205 miles per hour.

The complaint argues that such a high-powered sports car should have a higher standard of crash protection, and that a mechanical malfunction forced Rodas to veer off the road.
Geragos also hired investigators to evaluate wreckage at the scene, who determined that Rodas was driving 55 mph before the vehicle went out of control. This contradicts the Los Angeles County coroner's report that car was speeding at more than 100 mph, and the investigations by the Los Angeles County Sherriff's Office and California Highway Patrol that focused on speed.

Porsche pointed to the discrepancy.

"As you know, the crash was subject of a very detailed investigation by the authorities, both the California Highway Patrol and the L.A. County Sheriff's Office," said Bernd Harling, Head of Public Relations for Porsche Cars North America. "The reports showed that driving at a high speed in a negligent manner caused the crash. Both concluded that there was no mechanical defect of the vehicle involved."

Bernd Harling must have gotten on the phone to Germany and said the equivalent of "get a load of this..."

Do you know how Mr. Walker and Mr. Rodas could have ended up not being killed? By not getting into a car and driving too fast. I mean, how hard is it to apply some common sense? How is it that there are lawyers even arguing about this--the car was widely known to be a "performance" car. Simply getting into that vehicle is a risk in and of itself.

These two men got into that car and it crashed. Attorney Mark Geragos found someone who said that the car was going 55 miles an hour--which is bullshit but what do you expect from a celebrity attorney who remembers that, in the 1970s, everyone drove 55 for like a minute and then went back to driving faster than that--and now there's a lawsuit.

There is no personal accountability in this case. A tragic accident that was the result of getting into the wrong kind of car and driving in the wrong area at high speeds killed these men. Turning a burned out car inside and out looking for a loose washer and finding "experts" to say whatever they are paid to say isn't going to accomplish anything.
at May 18, 2014 No comments: