Officer Derek Chauvin Was More That Just a Bad Apple 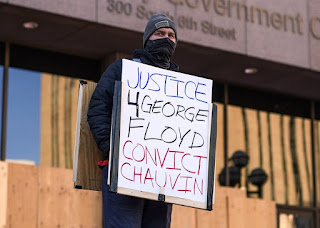 Officer Derek Chauvin of the Minneapolis Police Department was a walking liability and a threat to public safety long before he encountered George Floyd last summer.

In November 2013, Minneapolis police pulled over LaSean Braddock shortly after midnight as he drove home from a double shift as a mental health worker at Hennepin County Medical Center.

Braddock, 48, said he had grown somewhat accustomed to being stopped by police because his identity had been stolen and he was sometimes mistaken for the man who had been using his name. He carried paperwork with him from the Minnesota Bureau of Criminal Apprehension as proof, he said, so the stops were usually brief: He would show the paperwork to officers; they'd review it and let him go. But the officer at his driver's side window that day stuffed the documents in his pocket without looking at them, Braddock said.

When he hesitated to get out of the car, the officer aggressively hit the driver's side window with a flashlight, Braddock said. Two officers then tried to pull him from the car before he got out on his own.

"Then they tried to slam me on the ground, but I was about 240 pounds," Braddock said, adding that although he still was unsure why he was stopped, he complied to avoid injury. " Then they jumped on my head and my neck and my back. I was lying flat on the ground."

More than six years later, Braddock saw one of those officers again as he watched a harrowing video of George Floyd's final moments. Derek Chauvin, Braddock said, was one of the officers who had treated him roughly. A police report from that night confirms that Chauvin was one of the arresting officers.

This speaks to the depravity of Chauvin as a person. He was a battering ram of a cop, ready to use force without provocation. How many other cases of police brutality are there? I wouldn't trust the Minneapolis Police Department to have a firm handle on those statistics in relation to Chauvin and the other officers who were present when Chauvin murdered Floyd at the intersection of 38th and Chicago in South Minneapolis. What else are we missing here?

There has to be a significant restructuring and reorganization of the police force in virtually all of our major cities. The people hired to be cops have to rise above the possibility that they might be a "bad apple" in the bunch. They have to be screened out and removed when their conduct is revealed.

That means dealing with the fact that some police unions aren't actually there to protect the rights of cops in relation to the benefits and pay provided by their municipal employers. They're there to make sure bad cops aren't held accountable. They're right wing advocacy groups, in other words, and opposed to reform.

I'm all for raising the pay and raising the standards for who gets to be a cop. It should be a difficult process to get to be a cop, one that involves identifying anyone who might be a psychopath. It should pay well and offer some level of prestige. And I also want to see mental health workers integrated into police activity and public safety initiatives. I want those people to be paid more than they are so they can be held to a higher standard.

And if you have to raise taxes to do it, raise the fucking taxes. Do it now.