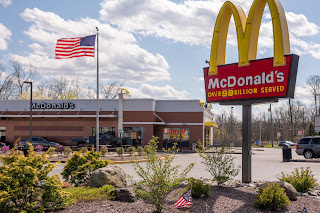 McDonald's needs to answer for having a "secret intelligence service" after we raise the minimum wage to $15 an hour:

For years, McDonald's has internally labeled activists and employees working with the Fight for $15 campaign a security threat and has spied on them, Motherboard has learned. McDonald's says that this work is designed to identify protests that "could put crew and customer safety at risk."

The fast food giant's secretive intelligence unit has monitored its own workers’ activities with the movement, which seeks to increase the minimum wage to $15 per hour, including by using social media monitoring tools, according to two sources who worked at McDonald's who had direct knowledge of the surveillance and leaked documents that explain the surveillance strategy and tactics. A team of intelligence analysts in the Chicago and London offices keep an eye on the activities of Fight for $15 labor organizers across the world, figure out which McDonald's workers are active in the movement, and who they are working with to organize strikes, protests, or attempt to form unions.

No McDonald's workers are currently unionized, but many of them are politically involved with Fight for $15, which has organized fast food worker strikes and protests since 2012 and is affiliated with one of the country's largest unions. To date, McDonald's has refused to bargain with workers who the company says aren't its employees because they work for franchises.

The surveillance is particularly notable given the current political battle being fought over a $15 minimum wage, which has been proposed in Joe Biden's $1.9 trillion COVID-19 stimulus package. An increase in the minimum wage is broadly popular nationally with both Republican and Democratic voters (and two-thirds of Americans support raising it to $15), but the proposal has become a sticking point in the stimulus legislation: West Virginia Sen. Joe Manchin—a critical vote in the Senate—has said he does not favor a $15 minimum wage. The federal minimum wage has been stuck at $7.25 an hour for more than 10 years.

What is depressing is that all of the large chains probably have the same anti-labor, anti-raising the minimum wage mentality that needs to be addressed by ensuring that workers have the chance to organize. You can't just raise wages without raising the quality of the job itself. You do that by addressing who gets insurance benefits, paid time off, and all of the other things that collective bargaining can guarantee for people who have never had these things. That alone should motivate people to support raising the minimum wage and improving the structure of what work looks like in the 21st Century.

I am hoping that the new Biden Administration will put someone in charge of the Department of Labor who can make it easier for workers all over the country to organize. More importantly, they need to fight the disinformation campaigns that are being run to scare people into supporting efforts to block a minimum wage increase.

Raising the minimum wage does NOT kill jobs. It raises workers out of poverty.