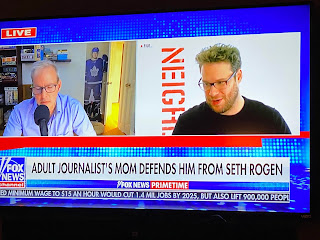 Now that the Republican Party has been thrown out of power at the Federal level, it is important to watch how the bullshit culture wars are going to be obsessed over by the media while Democrats try to fix the country.

This is a classic example of a bullshit story/event/situation. Comedian and film actor Seth Rogen is an activist in the real world. He uses his social media presence to hammer home the fact that Republicans are a bunch of dicks.

Here, he has slammed some journalist who isn't even worth naming and made it so the man's mother has to defend him. Wah, wah. Welcome to the stupidest country on Earth.

Rogen has also gone after dipshits like Ted Cruz. I am pleased with this development. I think more celebrities should pound home the indisputable fact that the Sedition Caucus of the Republican Party is full of grifters, cheats, assholes, and jackoffs.

In and of itself, if a United States Senator like Canadian-born Cruz can be completely thrown into fits of screaming and panic by something Rogen says about him, then that goddamned Senator is a worthless clown. In other words, Cruz needs to focus on the fact that he'll be in the minority for a while and his beard makes him look like a deranged circus performer with a scat fetish.

None of the things that really matter, which are economic in nature and should be organized around getting people relief, getting them jobs and better wages, and getting a COVID vaccine into their bodies, are affected by the standoff between Rogen and Cruz. But you have to credit Rogen for getting Cruz so freaked out that he is probably curled up in a sleeping bag filled with his own feces. It keeps Cruz from developing anything that resembles a coherent argument against helping the American people.

And that's a good thing.