You'll Take What We Give You and You'll Like It 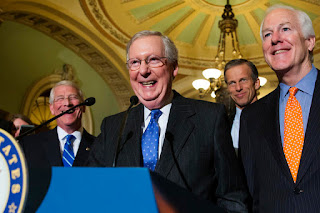 There will be a stopgap, half-assed stimulus and it's better than nothing.

The package would send direct stimulus payments of $600 to individuals, half the amount provided in the first round of checks that went out in the spring. As with the first round, the payments will only be sent to people below a certain income level, though it wasn't clear Sunday where that would be set.

Eligible families would receive an additional $600 per child -- which is $100 more than Congress gave families in the first round of relief last spring.

Everyone who relies on unemployment benefits gets something, but not much.

The jobless would receive a $300 weekly federal enhancement in benefits for 11 weeks, from the end of December through mid-March under the deal. The amount is half of the earlier federal boost, which ran out at the end of July.
Also, the agreement calls for extensions of two other pandemic unemployment programs that were created in the CARES Act in March. Both are currently set to expire at the end of this week, affecting an estimated 12 million people.
The Pandemic Unemployment Assistance program expands jobless benefits to gig workers, freelancers, independent contractors, the self-employed and certain people affected by the coronavirus. The Pandemic Emergency Unemployment Compensation program provides an additional 13 weeks of payments to those who exhaust their regular state benefits.

Blaming the Democrats in the House and Senate for how paltry and miserly this deal is ridiculous. They passed extensive, substantive benefits for Americans back in the Spring. The Republicans in the Senate blocked those benefits. And then, we had an election. Virtually every one of the worst Republicans imaginable got re-elected. There is a massive disconnect between the American voter and understanding who actually is responsible for kicking them in the head.

The voters in Kentucky, Iowa, North Carolina, South Carolina and Texas who could have changed out their corrupt GOP Senators for people who would vote to help them said, nah. We like being kicked in the head and going bankrupt.

You get the government you vote for. And if you're getting screwed because of that, well, it's not my problem. I voted specifically to help people all over the country. I voted a straight Democratic ticket. Anyone who thought voting for Joe Biden and Joni Ernst was a bridge too far, fuck them. They will get what they deserve. 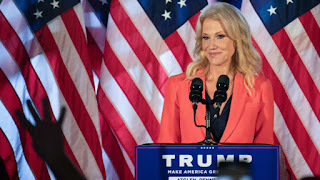 I guess we will now get to sit back and watch the Trump Regime's vicious liars cash in on their infamy:

Former Trump advisor Kellyanne Conway has signed a multi-million dollar deal to write a book about her time in the White House, the Daily Mail reports. The exact price tag is unknown, but is expected to exceed former National Security Adviser John Bolton’s $2 million advance for his memoir. While the Daily Mail quotes an anonymous insider stating that Conway will write “the most unvarnished, eye-popping account of her time working for the president,” she has publicly remained loyal to Trump, campaigning for his re-election and speaking at this year’s Republican National Convention.

Conway repeatedly, and with gusto, broke the law as a spokesperson for the evil that is Trumpism. She has enough Hatch Act violations to warrant her own slew of pardons. Her inability to raise her children and function like a normal human being is already well documented.

But what do we do with such people? Giving them money for their "experiences" is a way of laundering the evil things they have done. Yes, there's capitalism at work here. There's an audience for crass liars and the lies they tell. It's "entertainment" to watch a person use their mouth to savage others in the public sphere. Never mind that they told lie after lie after lie to do it. We don't value the truth anymore. We don't care about a person's ethics. We could give a shit if they have an ounce of credibility. It's all about the game, the hits they score, the soundbites that get repeated, the headlines that are created out of their atrocious leaks of information.

Never forget that there is a media complex that has used Conway as a confidential source for decades and has created whole entire news cycles out of material designed to manipulate public opinion. The reporters who protect Conway's identity and launder her filth are just as bad as she is but aren't worth as much to the publishers. They only get a few hundred thousand dollars for their bullshit as an advance because they're not the "star" that is Conway.

How fucked up is that this person is considered important in the first place? If credibility mattered, she'd be begging for change down at the nearest bus stop.

If you pay this wretched person millions for their story, aren't you, in effect, endorsing the rehabilitation of her reputation and giving the next flaming asshole an incentive to do exactly what Conway has done and that's profit from the suffering of the American people at the hands of a fascist Republican president? And if you ignore the media personalities who enable her, well, you're just rewarding the whole rotten infrastructure, aren't you?

Seriously, fuck these people. They will pay no price for what they have done and, instead, will be amply rewarded for doing horrendous things to our society.