Breaking the Law Like it's Going Out of Style 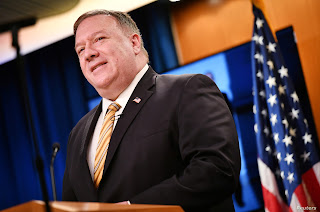 When Mike Pompeo makes up his mind to break the law, he does it safe in the knowledge that he's going to get away with it:

Secretary of State Mike Pompeo is under investigation for potentially violating a federal law that forbids federal employees from engaging in political activity while on duty or while inside federal buildings over his address to the Republican convention in August.

The Office of the Special Counsel, an independent federal investigative agency, launched a probe into Pompeo's speech to the Republican National Convention while on a taxpayer funded trip to Jerusalem on August 25, according to two House Democrats.

It is the second investigation into potential Hatch Act violations that the OSC has opened into Pompeo, whose use of resources and decision-making at the State Department, along with his wife's, have triggered a series of investigations by the agency's inspector general.

"This information comes on the heels of reporting that OSC is also looking into Secretary Pompeo's stated commitment to rush out more of Hillary Clinton's emails by Election Day and as the Secretary has misused State Department resources on his speech tour of swing states," the Democrats said.

Given the fact that Trump's last attempt at diplomacy resulted in being impeached, it's not outside the realm of possibility to conclude that no one has any idea what Pompeo actually does with his time. It could be that he is working on diplomatic matters and international relations. Or, what seems more likely, he's lining his pockets and forcing his staff to take care of his wife's inability to do anything for herself.
In any event, America is less safe with a corrupt, incompetent Secretary of State at the helm, especially one who doesn't believe in following the law.
at October 26, 2020