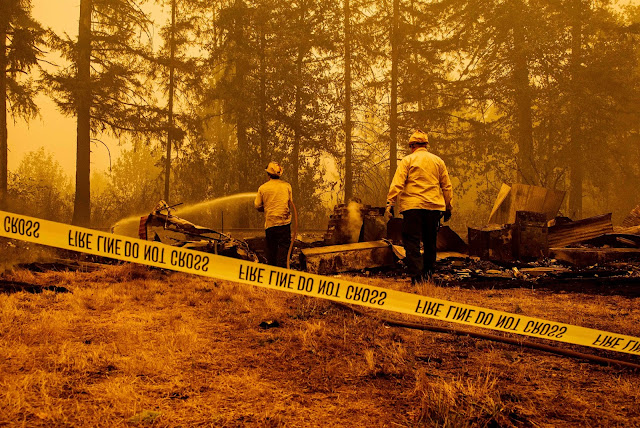 This has to stop:


Police and local officials on the West Coast are battling multiple raging fires. They're also fighting a wave of misinformation from false rumors spread in neighborhood Facebook groups and on far-right websites that antifa activists were setting the blazes.
At least six groups have issued warnings about the false rumors, including some pleading with the public to stop sharing the misinformation.

“Rumors spread just like wildfire and now our 9-1-1 dispatchers and professional staff are being overrun with requests for information and inquiries on an UNTRUE rumor that 6 Antifa members have been arrested for setting fires in DOUGLAS COUNTY, OREGON,” the Douglas County Sheriff's Office wrote in a Facebook post on Thursday.

Whatever needs to be done to regulate the flow of misinformation and put a stop to it has to start with understanding that it affects public safety. People are dying because they are being mislead intentionally in order to spread a dangerous conspiracy theory/ideology through mass hysteria. This is the kind of actual hysteria that kills people. QAnon is the asshole who yells 'fire' in a crowded movie theater, laughs when people are trampled, and gets away with it because Facebook says its alright to do these things.

This is unbelievable. This is what law enforcement has to deal with? Seriously?

Deputies have contacted several groups of residents in Corbett who have set up checkpoints and are stopping cars. While we understand their intent is to keep the community safe, it is never legal to block a public roadway or force other citizens to stop.


This is a form of domestic terrorism. Not only is it being used to ratfuck an election, it's a threat to public safety.

The attorneys general for these Western states need to have a quick confab and begin with putting together a lawsuit against any social media company that actively entertains and spreads QAnon information. Facebook, Twitter, Instagram, Fox News -- they are all liable for this. Any Republican spreading it should be liable as well. Start with massive fines and criminal prosecutions for disseminating threats and information that deal directly with public safety considerations.

Once the fines hit, and once these companies realize that they need to de-platform the people who spread QAnon misinformation, it will probably take years to deprogram the acolytes of stupidity. And if this was just about wacky hats and memes on comment threads, that would be one thing. We have individuals with guns ready to shoot people because they are inundated with bullshit that isn't true. Someone better do something fast.
at September 12, 2020