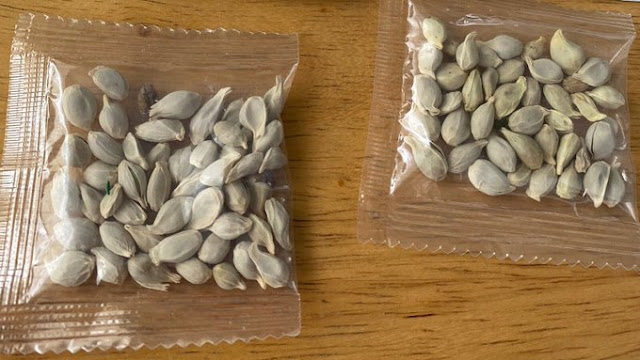 If you receive a bag of seeds in the mail from China, tell your local officials and don't bother trying to inform our incompetent Trump-run government about it:

Officials in at least four states are urging residents to report any unsolicited packages of seeds that appear to have been sent from China, warning that they might be invasive or otherwise harmful.

The agriculture departments in Washington State, Louisiana, Kansas and Virginia have issued statements in recent days, noting that residents had reported receiving packages of seeds in the mail that they had not ordered. Based on photos, the seeds appear to have been mailed in white pouches displaying Chinese lettering and the words “China Post.”Some of the packages were labeled to say they contained jewelry, according to the Kansas Department of Agriculture.

Packages of seeds have also been sent to residents in Utah, Arizona and Ohio, according to local news reports.


What's a Trump regime official or potentate or acting deputy vice chairman going to do about it?

Seriously, this is probably just an effort by a Chinese company to distribute their product illegally. It's  likely nothing nefarious beyond that. But we don't have a State Department. We don't have a functioning set of agencies that could respond. We have screaming, diaper-clad toddlers working for the ultimate fool who could easily screw up a one car parade.

In other words, if this happens to you, the Federal government is going to be of no use in helping to deal with the problem the way that it would have in decades past. And I think people all over the world are beginning to realize that they can exploit the inherent stupidity in Trump voters and get them to work against American interests and their own economic self-interests. I'm not going to be surprised when the Chinese start sending AK-47s and poison to individual Americans, and that's probably the next thing that's coming in the mail.