Wet Wipes Litter the Ground Where the Queen Vacations 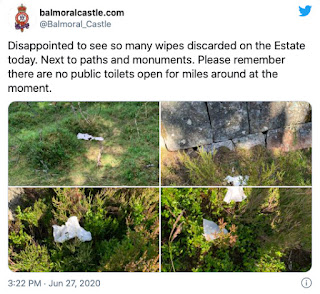 The world has turned mad, and everything is upside down.

Walkers are relieving themselves in the grounds of Queen Elizabeth's Scottish residence, staff have said.
Employees at Balmoral Castle, which the Queen frequently visits for holidays throughout the year, have complained about wet wipes being left on the estate and urged people not to use the spot as an outdoor toilet.
Most public facilities are closed in the United Kingdom due to the country's lockdown, but people are allowed to exercise and socialize outside, leading many to seek quiet public places if nature calls during a day out.
"Disappointed to see so many wipes discarded on the Estate today. Next to paths and monuments. Please remember there are no public toilets open for miles around at the moment," staff at Balmoral wrote.
"Part of the problem is that we are seeing a lot of non biodegradable wipes being discarded in the countryside," they added. "Also, people are choosing to relieve themselves right next to busy paths or monuments rather than move a little bit further away to avoid contamination."

A person who cleans themselves with a wet wipe is a person with a plan. Why don't we celebrate that?
If you don't want to see this trash, then put up some bins and relax.
This is a first world problem of the highest order, and who's got time for any of that right now?
at June 29, 2020 No comments: 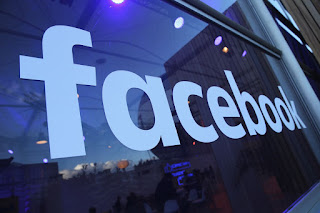 Tech companies should take note of what's happening to Facebook:

A growing list of companies say they'll join an advertiser boycotton Facebook in protest of what they say are the site's failures to stop the spread of hate.

A civil rights coalition, which includes the Anti-Defamation League (ADL) and the NAACP, launched the #StopHateforProfit campaign last week when it called on major corporations to put a pause on advertising on Facebook, citing the company's "repeated failure to meaningfully address the vast proliferation of hate on its platforms."

Within days, outdoor retailers REI, The North Face, and Patagonia said they were in. Other companies, including Upwork and Dashlane, joined too.

We are not living in a period of "good government." The corruption we're seeing at all levels of the public and private sectors is not something that can be sustained. When you see the value of Facebook plummet like this, you have to ask yourself, "was that really the value of the company in the first place?"
In as much as Facebook could monetize your data, freely given, yes. But the reality is, without proper regulation, a company like this cannot continue to operate in the same way for very long. An activist, law-respecting government would have already regulated how Facebook uses data and what it sells it for. A government that protects consumers would have already broken up the company and would be looking at Amazon and a host of others because their business model--screwing people eight ways to Sunday--isn't the sort of thing that should be tolerated.
And no, Facebook is not being censored. It's being brought into the 21st Century, kicking and screaming like an anarcho-libertarian problem child.
at June 27, 2020 No comments:

It Was Always Bullshit

If you're reading this out of context, like I just did, don't worry.
This is what John Bolton put into his book about his time in the Trump Regime. This is what former Chief of Staff John Kelly said about Trump's son-in-law, Jared Kushner. And that's Trump's response--how else are we going to stop the caravans?
The caravans were just a bunch of bullshit. Everything about Trump and his regime is a criminal act that has gone unpunished.
Thanks again, GOP. You own this mess. You own this fiasco. You own all of it, forever.
at June 17, 2020 No comments: 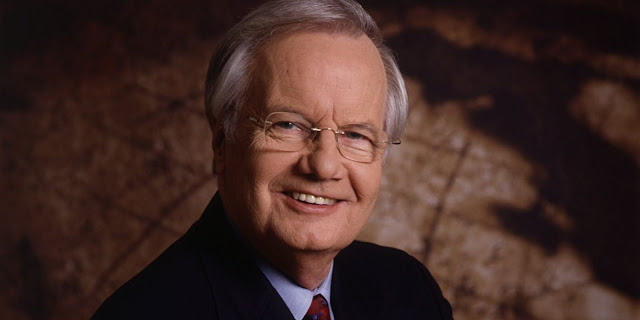 The great Bill Moyers has written an eloquent list of what Trump has done to destroy our democracy.

I'm putting this here for reference purposes because hell yeah, I agree with this.


He has declared himself above the law, preached insurrection by encouraging armed supporters to “liberate” states from the governance of duly elected officials, told police not to be “too nice” while doing their job, and gloated over the ability of the Secret Service to turn “vicious dogs” and “ominous weapons” loose on demonstrators — to “come down on them hard” if they get too “frisky.
He has politicized the Department of Justice while remaking the judiciary in his image.
He has stifled investigations into his administration’s corruption, fired officials charged with holding federal agencies accountable to the public, and rewarded his donors and cronies with government contracts, subsidies, deregulations, and tax breaks.
He has maligned and mocked the disadvantaged, the disabled, and people of color.
He has sought to politicize the military, including in his entourage the secretary of defense and the chairman of the Joint Chiefs (dressed in combat fatigues), as his orderlies unleashed chemical fumes on peaceful protesters – all so that the president could use them as stage props in a photo op, holding up a Bible in front of a historic church, just to make a dandy ad for his re-election campaign.
He has purged his own party of independent thinkers and turned it into a spineless, mindless cult while demonizing the opposition.
He has purloined religion for state and political ends.
He has desecrated the most revered symbols of Christian faith by converting them to partisan brands.
He has recruited religious zealots for jobs in his administration, rewarding with government favors the electoral loyalty of their followers.
He has relentlessly attacked mainstream media as purveyors of “fake news” and “enemies of the people” while collaborating with a sycophantic right- wing media – including the Murdoch family’s Fox News — to flood the country with lies and propaganda.
He has maneuvered the morally hollow founder of Facebook, Mark Zuckerberg, into compromising the integrity of the most powerful media giant in the country by infusing it with partisan bias.
at June 08, 2020 No comments: 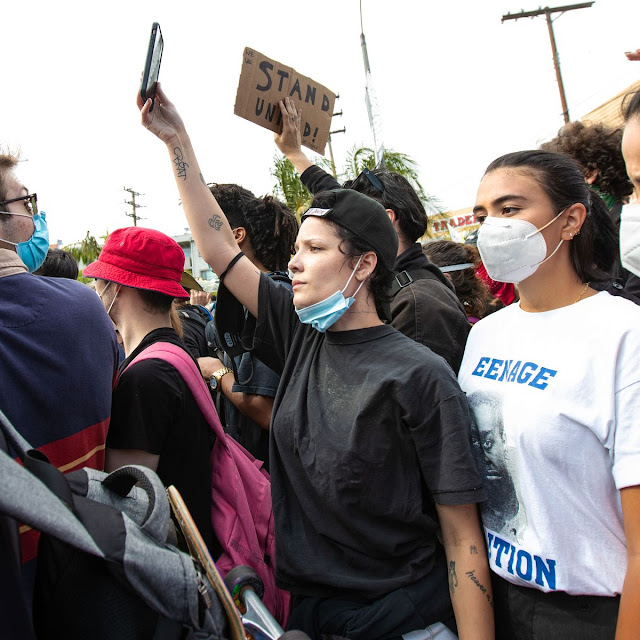 A Symbol of Distress 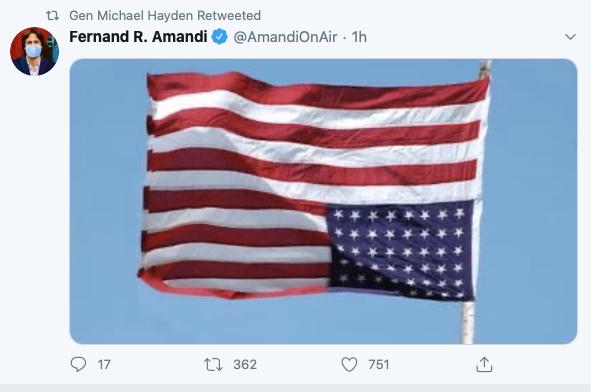 It should be noted that General Michael Hayden was a creature of the Republican establishment. He ran several intelligence agencies during the George W. Bush administration. I do not believe him to be a hysteric nor do I think he has become a flower child hippie in his retirement.

This is a serious wake-up call to the American people. It should not pass without comment.
at June 02, 2020 No comments: