Republicans Will Threaten to Shoot Anyone 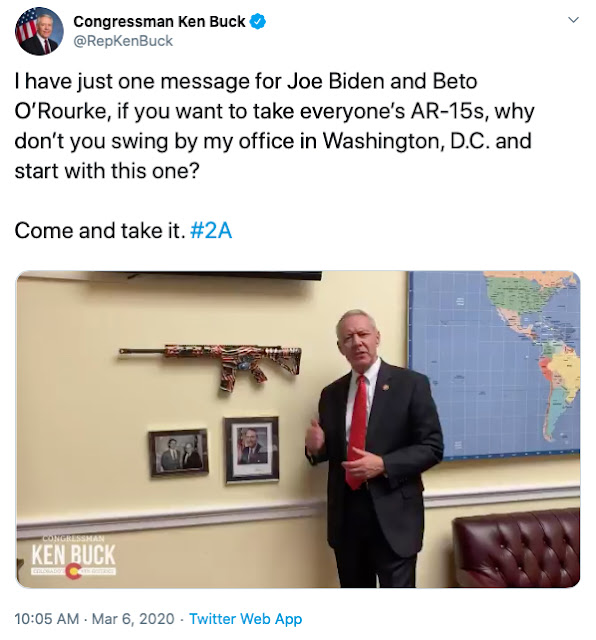 They're not even bothering to hide it anymore.

Today's GOP is completely out of control and unhinged. Chances are, you're like me and you had no idea that there even was a Representative Ken Buck from Colorado's Fourth District. I can't even remember writing about this guy before today, what with all the other batshit crazy nut jobs currently serving in Congress.

Here, you have an American politician who has been alive for the last fifty years or so and he's threatening the former Vice President of the United States of America and a former member of the House of Representatives with gun violence. I would hope someone has taken note of this and is moving accordingly to protect them from this lunatic. He seems to be a danger to the people around him.

Buck represents Eastern Colorado, the flat part, mostly, and hasn't had a real challenger since 2010. If I were a part of the Democratic Party out there, I would be helping to send Buck home.

You see, both sides don't threaten to shoot each other. The Republicans do that. The Democrats simply organize themselves and throw you out of office on Election Day. That's how that works.

UPDATE: Yes, the rifle in Congressman Buck's office is "inoperable." Through an agreement with Capitol Police, he has a trigger lock on it and the bolt assembly is back in his home state.

As we know from watching Raising Arizona, that outdated adage "It ain't armed robbery if the gun ain't loaded" does not apply here. A threat with a weapon, inoperable or not, is still a threat.
at March 06, 2020