Wisconsin is the Mirror That Reflects What America Could Become 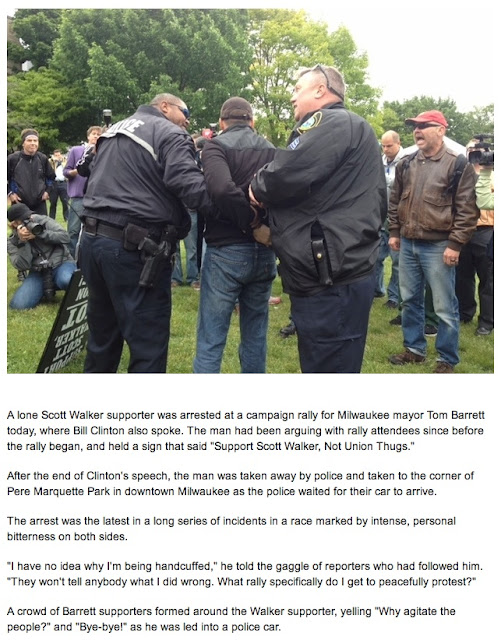 Does this man have a right to stand there and wave his sign?

The problem is, neither side of the political spectrum really believes this is a right that people are entitled to anymore. Those on the Republican side of the spectrum cannot tolerate anyone who protests in their presence; the quickest way to get a Republican to start believing in the rule of law again is to allow them to use it to silence people who point out what lying bastards they are.

I'm rather disappointed that this lone, tragic Scott Walker supporter wasn't given a blanket, a chair, a bottle of water, and his own retinue of "buddies" to help him understand that the Democrats in Wisconsin are all that stands between the future and oblivion. The destruction of unions, the elimination of organized labor, and the inability of any group to seek redress of grievances in the workplace leads to the tyranny of corporations; it leads to a future where everyone works for five bucks an hour and where they're lucky to get that. It leads to the 1870s all over again, buddy.

They should have cleared a space, put tape around him, and allowed him to act like an ignorant jackass in public. They should have fanned the hot air away from him and given him free access to the toilet if necessary, with the promise that nothing would happen to his sign if he needed a break.

I guess it is possible that he broke some law and bashed someone with his sign; perhaps he is another ignoramus with a handgun sticking out of his pants. Who knows?

Be overly polite and tolerant of these people; they know not what it is they believe in. They don't understand that their future is as bleak as everyone else's when the billionaires win and when the people lose. Waving their signs and bellowing their nonsense is what connects them to whatever it is they think they believe in. I can't figure out what that is; it has something to do with what happens when a broke, desperate community mortgages itself to bail out a crummy professional sports team and builds a stadium only rich people can afford to use.

Hey, maybe I've got it wrong. Perhaps this fellow has a few billion rolling around in his sock drawer. Maybe he's a robber baron in disguise, hoping to break a few unions so he can put the screws to his terrified workers. Really, sir. Jeans? In public? How unbecoming of a man of means.

Who wants to live like that? Besides this jackass, obviously.
at June 01, 2012