Which Way Do You Want It? 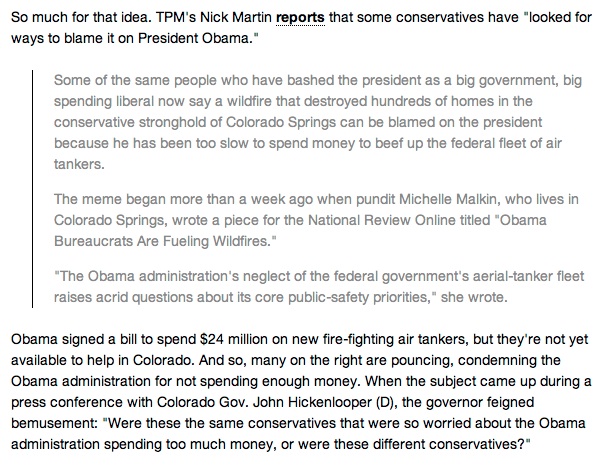 President Obama and his socialist minions finally find a way to stay out of the way of small government conservatives and libertarians alike and this is the thanks he gets?

We don't have any money to spend on health care, a stimulus package, improving our nation's infrastructure (hello, what do you think a fire-fighting plane is part of but the infrastructure of the Federal firefighting effort?), taking care of Veterans, investing in new technologies, getting off foreign oil, or finding renewable energy sources, but we're supposed to buy the idea that there's plenty of money to fight forest fires from the air in Colorado Springs and Colorado Springs only but the Obama Administration has been too slow to spend that money we don't have?

Convoluted logic much? Either you believe in a functioning, active government that spends money and invests in things like planes and technology and preventative forest management or you believe in things like the Ryan budget plan which cuts money for those things and starves old people and gives tax breaks to the wealthy. If you're going to sit here and say you believe in both, get the hell out of town.

That reminds me of a saying. Everybody hates the government, but damned if they don't change their mind when a fire truck pulls up at two in the morning and saves their house from burning down. Damned if they certainly don't.
at June 29, 2012