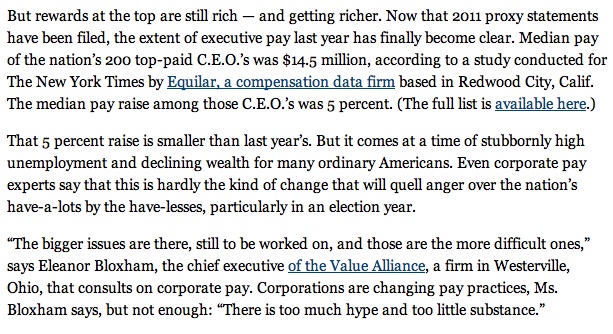 There is a great deal of suffering in the United States, but none of it is being experienced at the top. The pay of CEOs, on average, rose 2 percent in 2010 and 5 percent in 2011. Despite the fact that tax rates are incredibly low on the wealthy, job creation is still muddled and troubled and the rich are getting richer. At what point do people begin to realize that the shakedown of the American people has entered a tenth calendar year and is shooting for an eleventh with no break in sight?

So, if we were to raise the tax rate on everyone who makes more than a half a million per year by six percent, we'd fall into revolution and anarchy, would we not?

It is patently unethical to continue in this manner. The wealthy in America enjoy a standard of living completely unheard of on Earth as it is in Heaven. The suffering at the bottom grows and the comfort of those at the top races into the stratosphere. And Mitt Romney could very well be the next President, guaranteeing four straight years of unrestrained corporate greed with zero accountability.