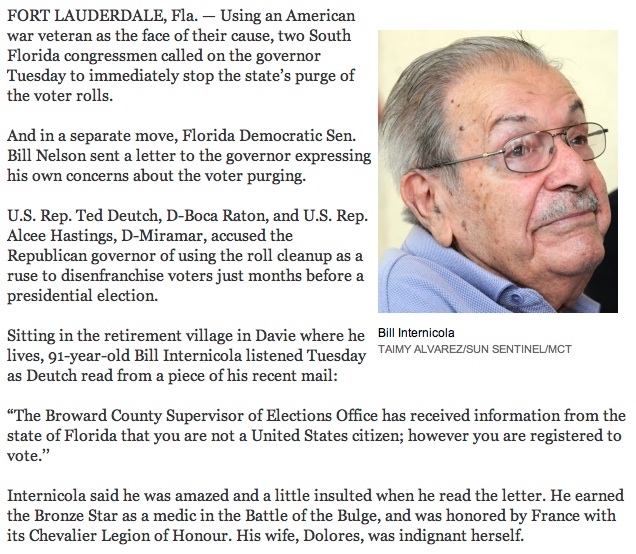 I keep telling people that the Republican Party hates Veterans, and I think this message is finally starting to gain some traction.

The Republicans want to disenfranchise Veterans because they tend to be consistent with their voting patterns. Many of them are already Republicans, and vote Republican no matter what, so they are a safe voting bloc. Angering them does not automatically lead to defections, in other words.

The Democrats who can be identified as Veterans know that their benefits are under siege from Republicans. They know that the Republicans don't want to foot the bill for their foreign policy misadventures--to do so would be to acknowledge that they made a horrible mistake by invading Iraq and by creating so many wounded warriors. It was all about patriotism when it was time to vote for defense spending five or six years ago; now we hear about austerity and budget cuts when it comes time to figure out what we need to spend on rehabilitating and taking care of Veterans.

Naturally, they want to purge the voter rolls of anyone who even remotely sounds foreign. The fact that Mr. Internicola happens to have been awarded the Bronze Star for his service means nothing to these people; follow the link to the article and you'll see comments from the wingnuts who think that this man is probably an illegal alien, despite a lifetime spent in this country since returning from World War II.

If there's one thing that should have earned this man his citizenship and his dignity, it would have been his service. That means nothing to Republicans. They don't know what service is, and when they see a person who has served and who now identifies themselves as a Democrat, their first instinct is to disenfranchise that person and identify them as being un-American.

That's how it is in America right now--if you're a liberal, a Democrat, or someone who thinks that there is a progressive view of this country, then you have to be a socialist or a criminal. What a dismal state of affairs.
at May 29, 2012