The Maid Has a Million Dollars? 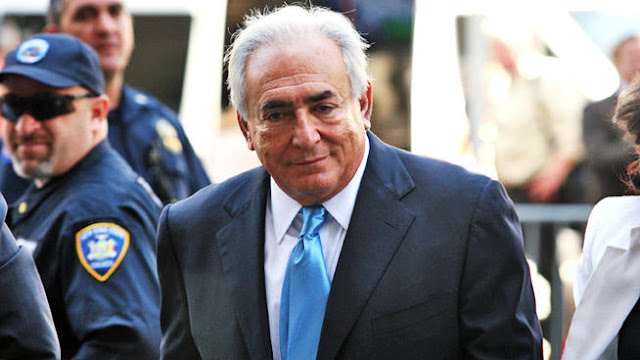 Dominique Strauss-Kahn is probably not counting on collecting the million dollars:

Dominique Strauss-Kahn is suing the hotel housekeeper who accused him of sexually assaulting her, saying she seriously damaged his reputation with what he calls a bogus allegation.

The former International Monetary Fund leader and French presidential hopeful struck back at maid Nafissatou Diallo's lawsuit against him with denials and a $1 million defamation claim of his own Monday, exactly a year after she told police he tried to rape her in his Manhattan hotel suite. He says whatever happened was consensual.

He was arrested, resigned from the IMF, and spent several days behind bars and three months on house arrest before prosecutors dropped the case, saying they'd lost confidence in Diallo's trustworthiness because she'd lied about her background and changed her account of what she did right after leaving Strauss-Kahn's room. Although prosecutors didn't say they believed she misrepresented the encounter itself, Strauss-Kahn's court papers blast her claims as intentional lies.

What does he hope to gain? His future in French politics is gone; his place in history is wrapped in the sordid lies of his personal life. His name is never going to be restored to respectability. Burying this woman in a costly lawsuit is a neat tactical move. Once the money on her end dries up, DSK can walk away from the legal jeopardy of a U.S. court decision.
Suing this woman misses the real target. Whoever "set him up" should be sued, or at least investigated. I am of the belief that DSK was set up in New York City; but the reason why he was set up is obvious. His personal habits and practices left him vulnerable to being smeared in this way.
Oh, and where is his BlackBerry? That should be the real issue here.
at May 15, 2012