When Mitt Romney was arrested by a park officer in 1994, it revealed more about his character than I think people are willing to admit. It also revealed that there are more than few wingnuts who have no respect for public safety or park rangers.

With regards to Romney, you can't read this and not conclude that the man believes himself to be above the law. Simply saying, "I'll just pay the fine" ignores the instructions given to him by law enforcement. Yes, that park ranger or park official is a law enforcement officer. Disregarding his instructions is breaking the law and he was well within his rights to put Romney in handcuffs and take him in. 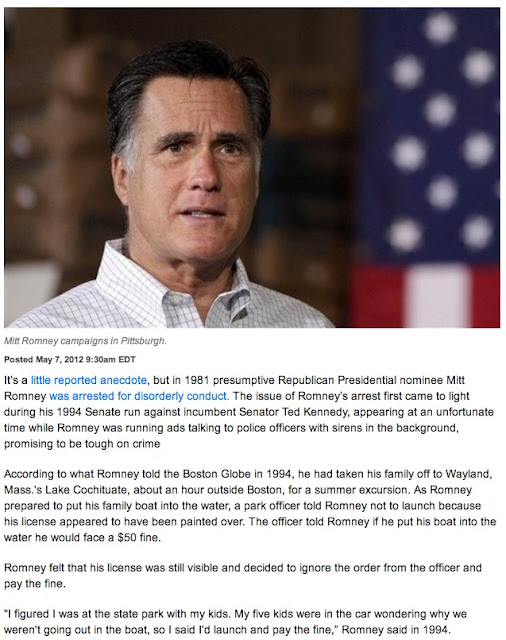 I think it is a wonderful touch to throw the boys out there, once again, and hope for sympathy and understanding. This is called deflecting attention away from the fact that he acted like a rich, entitled jackass in front of a law enforcement officer. Romney isn't Joe Sixpack, out on the lake for a good time. He's someone who ran for the U.S. Senate in the year that he was arrested. You'd think that a guy running for the Senate would have a little better judgment than that.

The law in question is pretty clear on this (granted, the law may have been updated since 1994): 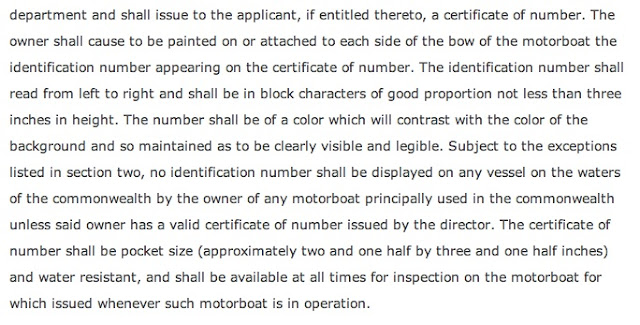 Any state that goes to the extent noted here to spell out how an identification number should be properly displayed on a recreational boat isn't fooling around. My experience is with the State of Minnesota, not Massachusetts. Where I'm from, you wouldn't dream of going out on the lake in a boat that doesn't have the proper numbers displayed. And you certainly wouldn't disregard the instructions of a park official.

Our wingnut friends have what is, apparently, a limited acquaintance with common sense and recreational boating. 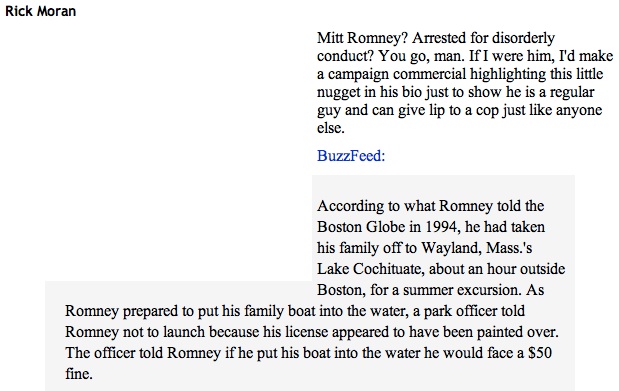 Yes, Rick Moran is a complete and utter idiot. "Give lip to a cop?" Really? Does he have any idea how dangerous it is to be a park official? On the national level, being a park ranger is more dangerous than being a special agent with the FBI. You are twelve times more likely to die in the line of duty as a park ranger than an FBI agent. 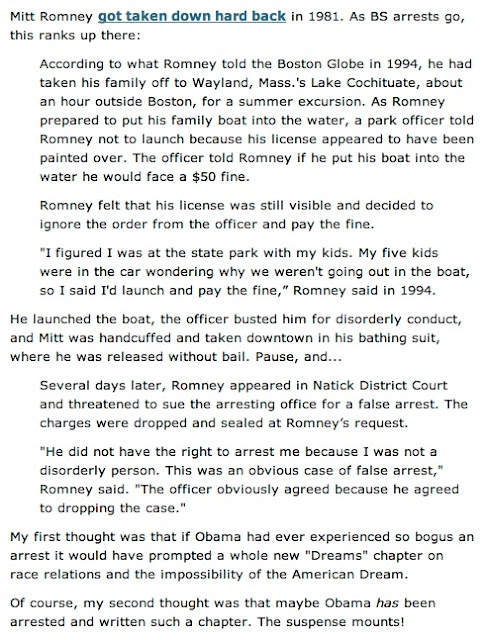 Poor Tom Maguire. The complete and utter extent of his reasoning capability is to make an Obama comparison. Talk about carrying water.

Not to be outdone, here's Hot Air: