The Hysteria Will Continue 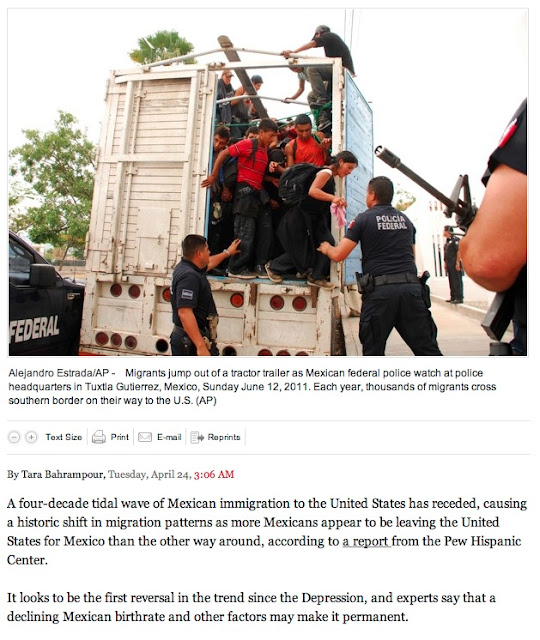 This is one of those stories that, in our anti-intellectual times, will be seen but not believed. Already there are probably a dozen or more wingnut bloggers, ready to slap this down.

America has a lot of problems, but far down on the list are problems directly related to so-called illegal immigration. The real problem, as far as I can see, centers around the fact that there are no jobs, there is no money, and no one is doing anything about it. So, why wouldn't people go back to where they came from?

Immigrants are not here to steal American jobs; there aren't any jobs anymore. And what few are available, nobody wants. Does anybody want to go pick cucumbers or tomatoes in Alabama this summer? Because there might have been jobs for that (this year, I don't think too many farmers in Alabama are going to plant food that no one will ever pick). Does anybody want to live in a large American city and make menial wages cleaning buildings and preparing food? Jobs a-plenty for that. Does anyone want to work construction when there's nothing worth building right now? Nope.

There are going to be a lot of jobs available when President Romney caves in to the base and builds a massive fence from California to the Gulf of Mexico. This fence will be designed so that the waves of immigrants who aren't coming anymore can watch how it keeps Americans from leaving.
at April 24, 2012