Petty Theft Gets You a Felony in Florida 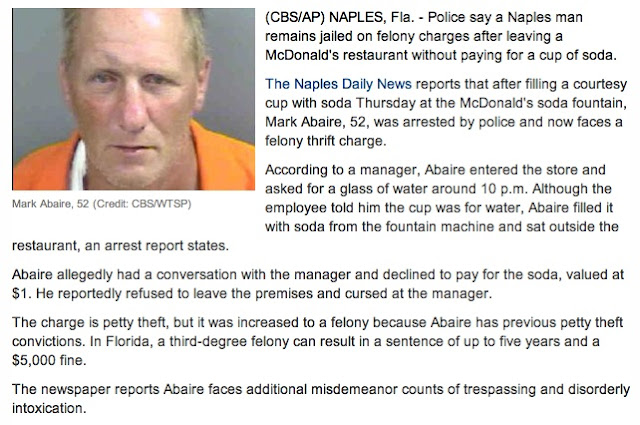 I'm sure that they'll throw the book at this man over a dollar's worth of soda, and there will be many who say that he has it coming and what part of illegal don't you understand and that we should jail the bastard for the rest of his miserable life. So long as someone else is getting the business end of the broomstick, right?

Come on. He was drunk, down on his luck, and he went into a fast food joint and got out of hand. Did he hurt anyone? No. Sober him up, jail him for a few days for the drunk and disorderly, and then let's move on. Charge him for with a felony? Over this? That's the definition of cruel and unusual punishment, and of the excess of the law with regard to piling on charges. Does this case even remotely appear to be the even and fair application of the rule of law? No. What a nightmare.

Why not throw him on the rack and whip him without regard for this quaint notion of mercy and compassion?

At some point, it will dawn on the rest of the country that Florida's laws were written by the priests on loan from the Spanish Inquisition.
at April 24, 2012