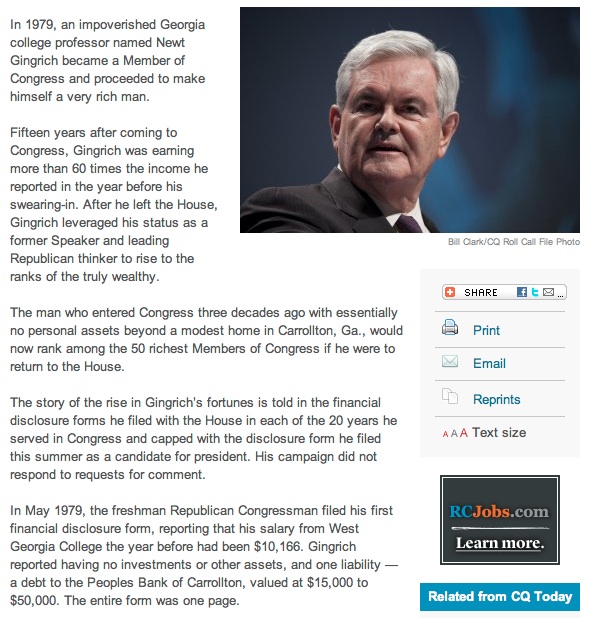 Paul Singer's article leads with a whopper of a mistake. To say that Newt Gingrich, circa 1979, was "impoverished" is ludicrous.

The article says that Gingrich was making a little over $10,000 per year in 1979, after having been denied tenure (which was for being too focused on running for Congress in the 1970s, apparently). His "debt" was probably some sort of loan or something of that nature, and I'm surprised that he did not own a home at that point in his life, but oh well.

In any event, this is what poverty looked like in 1979:

Now, I'm an idiot. And if I can look up something like this, and find where the poverty line was in 1979, why can't a big shot reporter with editors and a full-time job look it up? Given his family situation (a wife, several kids), Gingrich would have been at least two or three thousand dollars above the poverty line, and living in Georgia, to boot. Georgia, in case you didn't know, has traditionally enjoyed a lower cost of living than, say, Washington D.C. or the Mid-Atlantic region.

In other words, Gingrich wasn't "impoverished" by any stretch of the imagination. His "debt" was probably being serviced and his family was probably living at a level no better or worse than any of their contemporaries.
at December 06, 2011