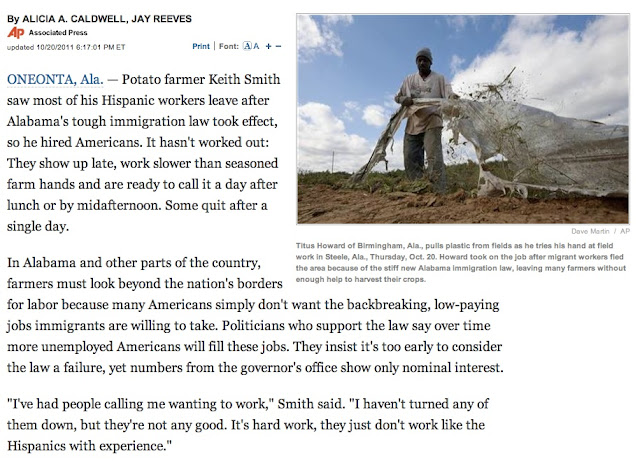 This is where you have to comment on the brilliant leadership of the State of Alabama. Every one of them thought that if they could just drive out the so-called "illegal immigrants" that it would magically fix everything. It didn't. Now they have produce rotting in the fields, which will drive up prices and hit the people at the bottom of the economic spectrum even harder. When you make healthy food too expensive to buy, you create a downward spiral for public health and public wellness. The only left to do is eat the seed corn, buy more Twinkies, and stock up on insulin.

It actually reveals a great deal about this country and it speaks volumes about why the rhetoric has gotten it wrong every time. Let me just say that if there weren't low-paying, hard labor jobs in this country that ordinary Americans were unwilling to do, we wouldn't be having this discussion. The fact is, these jobs have always been around. Remember slavery? That's what slavery was designed to do--fix the problem of how you get human beings to do backbreaking work. Migrant workers have had to fill a lot of the labor gaps in this country's history and they have had to do it for terrible wages. Think of that sort of life--months and months on end of doing nothing but farm work, hoping to make enough money to survive. And these are the people who are the problem?

No, they're not the problem. Poor people are not the problem with America's economy or society or culture. The real problems run deeper than that. Americans are conditioned to vote against their own economic self-interest and they are fed lies about why times are tough. It's that simple.

After shooting itself in the foot, and after terrorizing thousands of families, Alabama still can't figure out how to deal with this issue. There is high unemployment throughout the state, but nobody is willing to go pick potatoes and harvest other crops by hand. You see, that's "Mexican" work and people who have a very high opinion of themselves simply refuse to spend more than a pleasant, sunny morning working in the fields. Oh, the horror of it all! Having to bend over and pick things up--why, that's just not right. Americans should be in charge of the people who have to do that sort of thing, right? And when the jobs of the overseers are filled up, certainly we can create jobs were decent Americans can stand around with cattle prods and shotguns to ensure that no one misses a potato or takes a twenty minute break, right?

Hey, instead of spending Saturday watching college football, get out there and spend ten or twelve hours picking up vegetables in the field, okay? And then come back and tell me that things are better now that all of the "illegal immigrants" are gone.

People in Alabama screamed for this law and now they don't know what to do. There is work waiting for them, but they are unwilling to do it. They are too lazy to do it. There are people who have seen their unemployment benefits run completely out and they are not ready to go into the fields and dig potatoes out of the ground for any amount of money.

I guess the answer now is to criminalize laziness. Alabama should now pass a law that says that anyone who can't walk into a dirt field and harvest a cash crop for fifty or sixty hours per week should flee the state in the middle of the night and abandon their belongings and disrupt the lives of their children.
at October 21, 2011