What Really Happened After the 1986 Tax Reform 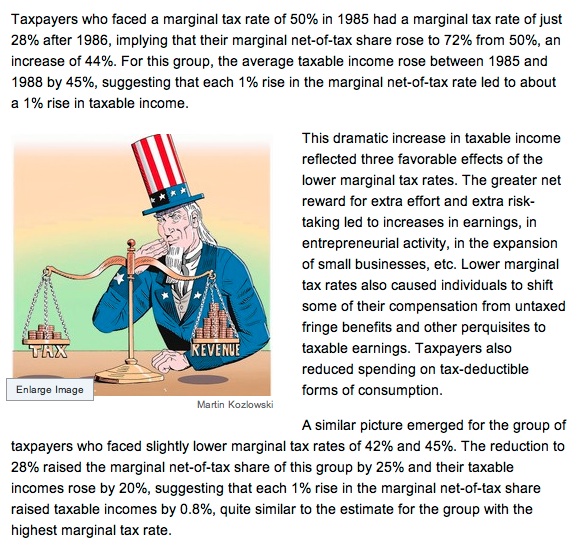 Martin Feldstein at the Wall Street Journal is arguing that the tax reform enacted in 1986 had a positive impact on the American economy. In many ways, sure, I'll buy that. He even goes so far as to say that, when you cut taxes, the amount of actual taxes paid into the system goes up, not down.

Ignoring the usual "trickle down" theories that go with this sort of thing, I'll add one piece of evidence which will show what tax cuts really do to the American economy. Taxes paid into the system are important, don't get me wrong, and Feldstein is not a liar, a cheat, or a thief in any sense of the word because he seems to be making a great partial argument. As seen above, he actually has evidence to back him up. But his evidence is missing something crucial.

The rest of the argument is here: 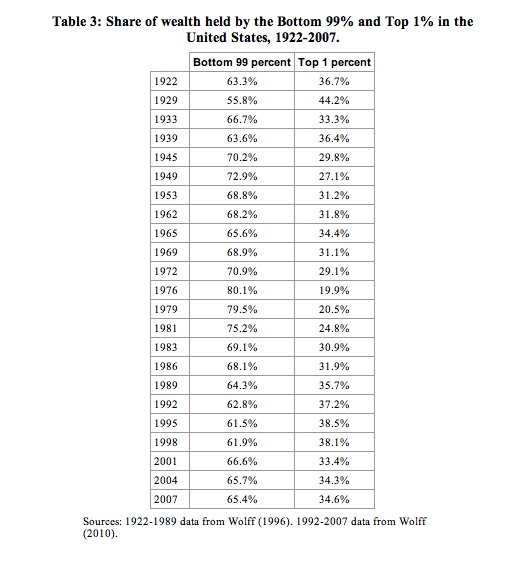 When we cut taxes, for some bizarre reason, the amount of wealth concentrated at the top goes up and when we raise taxes, it goes down. Look at three specific areas on that table. In 1922, the American economy wasn't in great shape, but wealth was more evenly distributed; when we skip ahead to 1929, look at how much wealth became concentrated upwards in this country, thanks to the policies of Warren G. Harding and Calvin Coolidge (and a little Herbert Hoover thrown in). The mantra of the 1920s was fiscal responsibility and no Federal spending.

After that, the tax rates kept things more or less in balance, and it was a sustainable balance that led to the great economic expansion of the American economy. Our economy grew when our top tax rates were in the 90 percentile range and the wealthy still held on to their money. During the 1940s and 1950s, the wealthy enjoyed an almost steady hold on around 30% of the nation's wealth; that would drop precipitously in the 1970s under Nixon and Ford. That's the economic record we should be investigating. What happened? Insert your own OMG and your own LOL on that one.

Our Gross Domestic Product has been growing at a massive rate, don't get me wrong. This rising tide has lifted a great many boats. But our economy is stagnating and wages are going down; it's time for a change of direction.

Look at what happens after 1986, as seen above. The bottom 99% of the economy saw their portion of the nation's wealth shrink by 4%. That's a shocking drop, even more so since it had fallen by roughly 12% in just ten years. So much for the Reagan tax cuts--all they did was redistribute income upwards.

Look at the spike that occurs after the Bush tax cuts--another sharp redistribution of wealth upwards, resulting in a steady, almost confiscatory level of wealth redistribution that continued unabated through the last decade. The wealthy are enjoying twenty-odd years of fabulousness and fatuousness that is absolutely killing out economy. Feldstein argues that one of the improvements that came about after 1986 was in the area of entrepreneurship and risk taking. How's that working out for us now? The wealthy are not creating jobs; they're hoarding their ill-gotten gains. This is why there's so much legitimate anger out there.

This is what tax cuts do--they put more wealth into the pockets of the top tiers of the economy. They do not increase the amount of wealth held by the bottom 99%. That's a fallacy that is constantly being rammed into this debate. Unemployment is a much larger issue, and when there is low unemployment, tax receipts increase because more people are paying into the system. That accounts for part of what Feldstein is saying, but not all of it. Unfortunately, we can't afford any more tax cuts. Not for another generation. But the Wall Street Journal is never going to stop beating that dead horse, no matter what.
at October 24, 2011