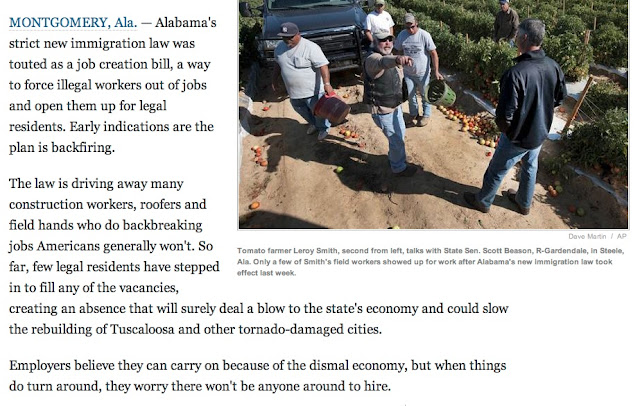 The State of Alabama has now become a national laughingstock. Faced with the ruins of Tuscaloosa and a fall harvest, the wise and just leaders of that state passed a law that basically kneecaps anyone who has work that needs to be done. Brilliant.

Interestingly enough, the article goes on to make the claim that unemployment in Alabama is going to go down because now legal residents will be able to take the jobs that the Hispanic workers have abandoned. How many of them will take up the slack in the roofing business or the tomato picking business is anybody's guess.

It's fashionable to hate illegal immigrants. But the problem goes beyond the law and immigration. There are jobs here no one wants to do. There are people who will do whatever they can to fill those jobs and make a life. Employers profit from this situation, and they've been begging the government to fix this situation. The government, at both the Federal and State level, is incapable of finding a political solution to a very simple problem. This is why we end up with what we have.

First of all, poor people aren't the problem. Second of all, the laws involved here are part of the rules of immigrating here. These laws are not in the same league as the laws that cover violent crime, stealing millions from a hedge fund, or setting up a Ponzi scheme. Third, the need for workers who will do the undesirable jobs is not going to dry up so fixing this problem can be done simply by granting right-to-work visas and permits.

I can't stand the demonization of people who come here to work. I think it's an issue of social justice, and we're going to look back at this period of American History and see a period of shameful decisions and misguided legislation, and, more importantly, a time when millions of good people were punished and humiliated and ruined for no good reason.
at October 06, 2011