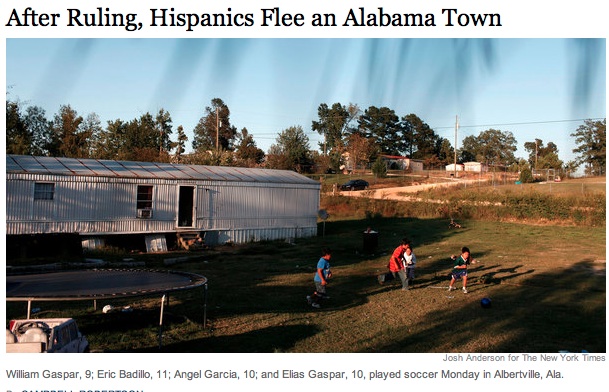 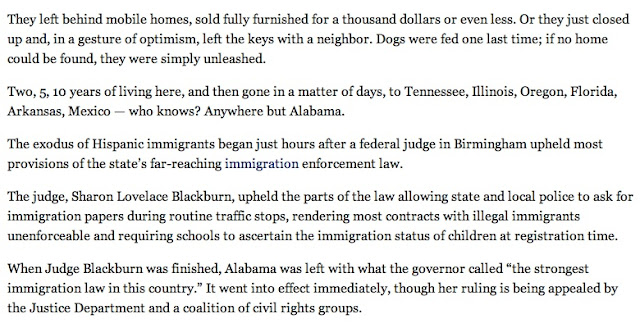 Ideally, yes you'd want people to come here legally and make a life for themselves. These people couldn't do that. But they were still able to get trailers, put their kids in schools, find work, pay taxes, and live in these communities. So long to those good citizens. And if you think a white worker is going to go and do whatever those Hispanic workers were doing to make ends meet, please. I was born at night, but I wasn't born last night.

In many cases, Hispanic workers in the other parts of the South outwork everyone around them and live happy, productive lives with sound family values. You can hate on the truth all you want, and scream about the law, but when push comes to shove, there are plenty of people who were born here who live in the underground economy and work for cash under the table and live outside of the system. That's what this is about. People who scream about the law can't admit that they, themselves, would gladly take a few hundred bucks for doing something off the books so that Uncle Sugar doesn't get his cut. This underground economy pays a consumption tax back into the system via local sales taxes, so don't tell me that people living in this manner don't pay taxes and contribute to society.

Hispanic families are stronger than other families because they find a way to live their lives according to basic rules that I certainly find appealing. They are honest, trustworthy, and do things that are very admirable. They take care of the elderly members of their family, their extended family structure means more children have more positive role models, and their way of life is centered around celebrating their family relationships and, basically, staying out of the way of everyone else.

I'm generalizing, and I'm stereotyping, but I get sick of all the negative stuff that I read and hear. I look at that trailer, and consider it the best chance those kids playing soccer had in this world. When I read about how their terrified parents basically had to give away everything they own for nothing and flee the state of Alabama in the dead of night, praying that a Johnny Law wouldn't stop them and demand papers from them, well, why even bother having a country anymore? It's a nation of envious, hateful, ignorant people who consistently vote against their economic self-interest. So far, I haven't seen a single Republican solve our economic problems, provide a decent plan to put people back to work, and try to solve our health care issues. I've seen some Democrats try and fail. But only one side dares to blame it on Hispanics who come here, live by the rules, and try to build a life.

I would rather have Hispanic family values around me than the ones found in many parts of white Alabama, where alcoholism, divorce, violence, and infidelity seems to have a free rein (I use that rather than "free reign" because it's the correct form) in those communities. We're all just people. Everyone is basically just trying to live their lives and not get hassled. African-Americans have been trying to find a hassle-free way to live with the establishment in Alabama for decades now. Do they have the rule of law in Alabama? Are they acquainted with it? Or is there just a penchant for screaming and posturing? How brave. I was always taught that being a Daddy meant taking care of people and doing the right thing. I guess Alabama doesn't have any Daddies.

In many Hispanic families, you'd better believe there's a Daddy. And a Mommy. And uncles, aunts, a grandma, a grandpa, three cousins and a whole lot of other people who watch out for each other. Hey, how about more of that as opposed to a jackass in a baseball cap with greasy hair, 2.4 kids he never sees, and a Confederate flag window decal? How about more responsible adults and fewer inarticulate, immature, inconsiderate bums who can't stop fucking women they're not married to and who can't avoid drinking themselves into a fender bender before 9 AM?

Since when are poor people the problem? I don't get that. Poor people are not the problem. They're not taking anything away from anyone. They're just living their lives.

And yet, the powers that be in that state cannot lead, cannot do the decent thing, and cannot make a law that doesn't stick a fist in the eye of liberty and grind a boot heel into the throat of decency. As God is my witness, I'll never live in Alabama, ever, and I'll never go there unless there's a damned good reason.

Alabama, welcome to the official status of Hateful Shithole of America (Arizona, I'm looking at you with one eye, and I know you're jealous, but there it is).
at October 04, 2011