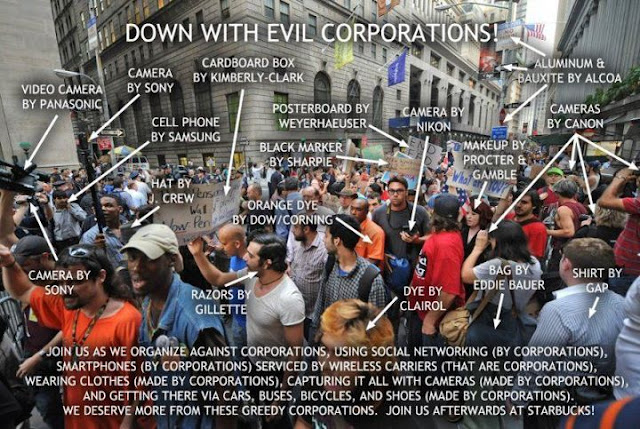 This is one of the sillier pieces of counter-occupy propaganda that is flooding the Internet. Cheap shots are easy to take. The problem is, pointing out that these people use products and protest corporations is fairly simple-minded. They're protesting the fact that the corporations are violating a basic social compact with the American public.

And, in point of fact, many of them are there because one of the things these corporations "made" was a product that repackaged thousands of home mortgages into junk debt which they sold and resold multiple times in order to destroy communities and create a vast amount of misery and hardship for these same people who are protesting.

I don't see them wearing or using their repackaged mortgage products because those things weren't marketed and sold to the American people. They were traded by speculators and fund managers and crooks and thieves and they helped ruin the American economy. That's patriotism, though. In the richest nation on Earth, you are free to create an instrument of destroying the economic fabric of the nation and no one thinks twice about punching the hippie who notices what you did.