What Important Detail is Missing From This Story? 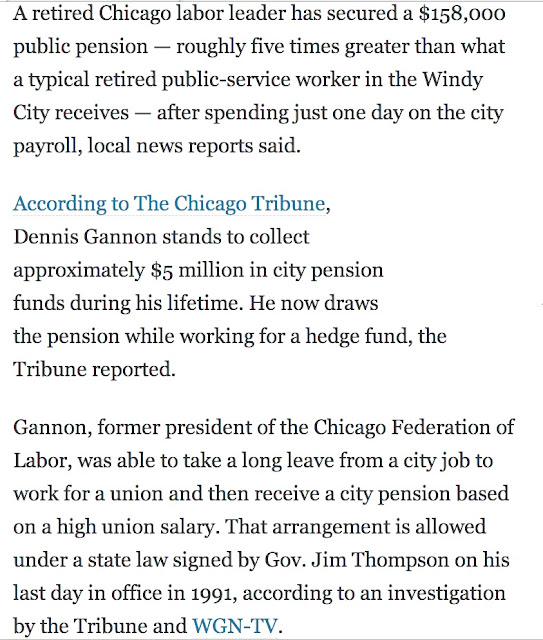 I'll bet you can spot the missing detail.

We have a case where a man worked for the union, worked for the city of Chicago, and ended up with a large pension. Dennis Gannon was a public servant, and he has retired with a great deal of wealth. He didn't break any laws or do anything wrong. But his success in life is a reason to destroy his life? Because that's exactly what this article intends to do. The Chicago Tribune cannot point to a single thing that he did wrong, except know the laws, know the system, and do what he needed to do for himself.

Anyway, that one important detail?

Governor Jim Thompson was a Republican.

Doesn't that make you view this in a different light? And why is it that this article mentions nothing about Thompson's political affiliation? Don't you think it is relevant to tell people that the man who signed the law that allowed Gannon to acquire his pension was a Republican, given the case being made against organized labor practices in this country by the Republican Party?

You see, the current argument is framed as if the Republican Party has been the absolute pure and contented virgin, dipping her toes in the waters of corruption and sin exactly no times in the entire history of the Tea Party republic. And yet, when you consider that a Republican handed the people a law with his signature on it that would allow Gannon to do what he did, you can't help but wonder what all the fuss is about. He now works for a hedge fund, by the way. So raise taxes on hedge fund workers already, my goodness. Wouldn't that make all of this feel a little better?

It is perfectly okay to hand millions to the rich, the well-connected, the corporations, the oil companies, the energy conglomerates and even to the lowly people who work for the hedge funds. But if one man who works for a union ever gets himself a decent pension, forget it.
at September 22, 2011