Not Everyone Who Owns a Wireless Phone Is Going to Fly 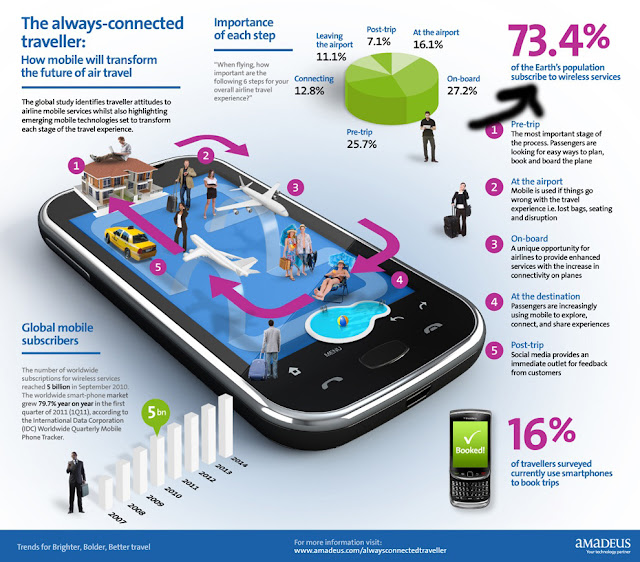 I cannot fault the marketing hype behind this "info-graphic" presentation. The idea that the airlines are going to cater to people who use cell phones is kind of a no-brainer. Anyone who understands that flying is really getting to be more and more of a rich person's endeavor already knows this.

I would predict that, as more and more airlines begin to realize that their product has such enormous costs built into what they do, they'll begin to price potential customers out of using their services. By charging more for a flight, fewer people will be able to afford to fly. The airlines will then structure their services based on getting just the right number of people to pay the right amount of money to keep them in business. That will mean that fewer people will fly, and those that do will pay just enough to make the airlines profitable. It could totally go the other way--what with cattle calls and all. But security nightmares, cost overruns, and labor costs are eventually going to make flying in a passenger plane a rich man's fancy, I would guess.

Anyway, the arrow points to a part of the info-graphic that bothers me. It says that "73.4% of the Earth's Population Subscribe to Wireless Services." I think it should have read "subscribes," but I'm nitpicking.

No, the real issue here is, so what? 73.4% of the Earth's population is not going to be flying on planes, ever, probably not even one time in their lifetime. That's because many of those "subscribers" actually use a pre-paid wireless phone and live at or below the poverty line. You see, wireless providers know that they can make money off of pre-paid handsets. There are just enough people who make just enough money to afford the basic luxury of having a phone with 50 or 100 minutes of service per month, and those people number in the millions. Are any of them ever going to fly on a plane? No, sadly they will not be able to afford to fly.

This is why I like to question the statistics that are out there. Sometimes you find things like this, which are minor, but do misinform.