We're Spending Next to Nothing on Homelessness 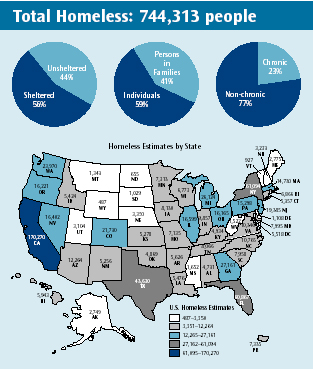 Back in March, the Government Accountability Office (GAO) had this to say [page 129] about duplication of efforts in fighting homelessness:

According to the Department of Housing and Urban Development (HUD), approximately 643,000 individuals and persons in families experienced homelessness on a single night in January 2009. [the graphic above shows other numbers, but it's less than a million homeless, I believe - WJS] Multiple federal programs provide assistance targeted to those experiencing homelessness or more broadly assist low-income populations. GAO reported that in 2009 federal agencies spent about $2.9 billion on over 20 programs targeted to address the various needs of persons experiencing homelessness. Some federal programs may offer similar types of services and serve similar populations, potentially leading to overlap or fragmentation.

In June 2010, GAO recommended that the Departments of Education, Health and Human Services (HHS), and HUD develop a common vocabulary to better coordinate homeless services. GAO also recommended in July 2010 that HUD and HHS consider more formally linking their housing and supportive services programs. The agencies concurred with these recommendations and to date have taken some actions to address them.

I realize that there are programs at the state and local level as well, but the fact that we spend around $3 billion dollars on homelessness is a tragedy in and of itself. Spending $10 billion dollars would be a great place to start. If this kind of money was invested in solving the problem--not just temporarily housing people but actually helping to correct the problems and issues that cause their homelessness--we could eventually spend less money on the problem (since prevention and solving the problem itself are worthy goals.)

Arguing that we don't have the money is a specious argument. We need to spend more money fighting homelessness in order to avoid having to spend money on health care costs related to being homeless. There's no reason why investing in a solution to homelessness couldn't benefit our economy. If you stabilize one person's life and get them on the right path, their contributions back into society are more than worth what you invested in helping them.