A Dishonest Hit Job on Federal Spending for Homelessness 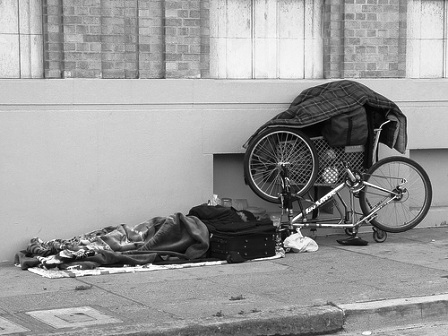 Never mind that we only spend $2.9 billion dollars per year battling homelessness--take a look at this argument:

The federal government's multi-agency approach to help the homeless is often confused, according to a recently released report that catalogues the hundreds of different ways the government squanders taxes through waste, overlap, fragmentation and bureaucracy.

The Government Accountability Office report found that in 2009, federal agencies spent about $2.9 billion on more than 20 programs that targeted homelessness. If that money were to be targeted toward the building of homes, at say, $200,000 per home, it could theoretically produce 145,000 houses.

"Take that money directly and give them sort of a voucher so they can go get housing on their own, or get some mental health benefits," Brian Darling, director of government studies at the Heritage Foundation suggested. "But the way it is now when you have all of these different government agencies administering the same program, you have government waste."

The headline for this Fox News opinion piece was "GAO Report Highlights Wasteful Spending on Ending Homelessness" and it implies that ALL of the "billions" being spent are wasteful. The GAO report says that there are some areas where there is duplication of effort. Eliminating those areas would save some money, but NOT the entire $2.9 billion being spent. This is the sort of deceitful argument that prevents people from getting a reasonable assessment of the problem.
In fact, the GAO report doesn't identify a specific dollar amount that could be saved by eliminating some of the duplication of effort costs. It merely outlines what could be done to save a limited amount of money between the various Federal agencies.
Would it shock you to find out that there already are programs in place that are eliminating duplication of effort? Here's what the GAO had to say [page 131]:

In keeping with GAO’s previous recommendations and the plan’s objective to increase coordination, it will be important for the federal agencies that have adopted the plan to develop implementation plans that include but are not limited to a project schedule, resource allocation, outreach measures, and a performance measurement strategy to evaluate their progress. The plan recognizes that collection, analysis, and reporting of quality, timely data on homelessness are essential for targeting interventions, tracking results, strategic planning, and resource allocation. As noted above, currently each federal program generally has distinct data requirements. The plan acknowledges that a common data standard and uniform performance measures across all federal programs that are targeted at homelessness would facilitate greater understanding and simplify local data management. Consistent with the plan, representatives with USICH noted that agencies are taking steps to improve and coordinate data, specifically citing the December 2010 announcement by the Department of Veterans Affairs to participate in Homeless Information Management Systems over the next 12 months.2 The formal coordination among agencies outlined in this plan may minimize fragmentation of federal programs and help address gaps in supportive services while linking housing and supportive services. The linking of these services is considered to be important for effectively delivering assistance to those experiencing homelessness.

The problem is no where near as bad as it sounds. And it's NOT wasting "billions" by any stretch of the imagination. The article on Fox News wants to put it out there in circulation that "billions" are being wasted so that if the political class decides to cut these programs they can fall back on media reports of wasteful spending. This gives them cover to shave small amounts of money from programs that are underfunded already and provide badly-needed services.
So, what is the problem, then? Billions will NOT be saved if ALL of the problems in administering these programs were reformed. That's just not possible. Is it worthwhile to pursue the ideal and make changes that can save a little money? Absolutely. But spending money to help Veterans end homelessness is NOT wasteful government spending by any measure. And laying out a dishonest argument about scrapping these programs and handing out vouchers is ridiculous.
This is a non-starter. It would lead to more cuts and punish the homeless even further. When the first homeless person under this magical voucher plan would lose or abuse their voucher, the outrage from the media would be deafening.
at May 05, 2011