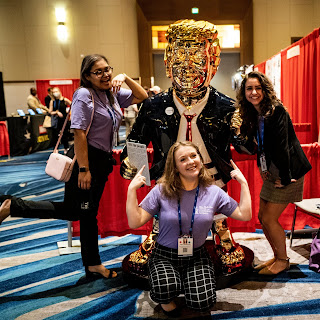 Katie Porter is Not Here to Suffer Any Fools 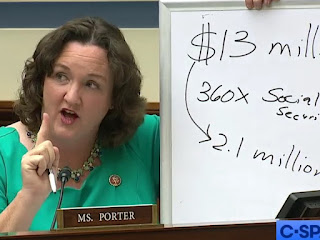 If Representative Katie Porter unearths some incompetence, malfeasance, or debauchery as a result of performing oversight on the Biden Administration, too damned bad:

But it felt different when Porter’s progressive passion and impatience for convention turned to them.

Just as she wielded a whiteboard and sharp questioning to expose the flaws and outdated thinking she saw in Postal Service management or the nation’s COVID-19 testing system, Porter recently took aim at House Democrats’ rules and traditions for what is usually a behind-the-scenes competition to determine which lawmakers sit on which coveted committees.

It was a calculated high-stakes gamble that resulted in Porter not returning this year to sit on the Financial Services Committee, one of the House’s most sought-after panels and one for which the former bankruptcy and consumer law professor was highly suited.

Porter has very little seniority but she more than makes up for it in personal achievements and outright expertise. I think it is a mistake to sideline her when she should be an incredibly valuable ally for anyone who believes in competent governance.

President Joe Biden is not going to bat .1000 every single day. He's trusting a lot of people to do the right thing and do their jobs. If they don't do what they're supposed to do, then the normal course of events is to get rid of them. That's how you lead, that's how you run things, and that's how good governance happens. You have to be tough and you have to give a shit.

Here's the thing that separates us from the wolves, or Republicans: if Porter does her job and if it exposes someone's inability to do their job, I am all for that person being fired or removed. I want the government to work and so does Porter. We just lived through four years of unhinged disregard for doing the right thing. When a Democrat acts like a jackass, get rid of them and get someone in there who can do the job.

What we don't need is blind partisan support for croneyism and graft. Porter is the cure for all that.